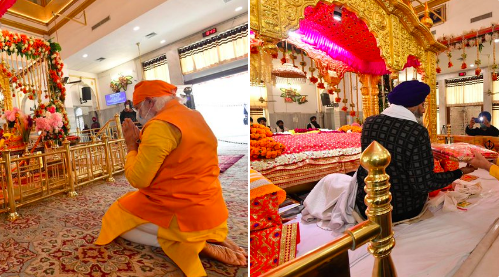 Prime Minister Narendra Modi on Sunday made a surprise visit to the Gurudwara Rakabganj here early morning and paid tributes to Guru Tegh Bahadur for his supreme sacrifice, expressing “I felt extremely blessed”.

People of the Gurudwara Parbandhak Committee were surprised to see Modi present in the premises. There was neither any security, nor barricading arrangements made on the roads during the Prime Minister’s unscheduled visit.

Like a common man he moved in the Gurudwara, and shocked everyone by his visit without any pre-scheduled programme. Modi’s sudden visit to the Gurudwara comes a day after the ninth Sikh Guru’s death anniversary was observed on Saturday.

Sources say that during Prime Minister Modi’s visit, special care was taken so that the people do not face any inconvenience because on Sunday, the number of visitors is quite high. That is why there was no such high-level security as is usually the case, sources say.

Modi’s sudden visit to the Gurudwara comes amid the agitation organised by the farmers of Punjab in the national Capital, which may be seen as a move to placate them. However, the BJP leaders say that the PM’s visit is a matter of pure faith and should not be seen from any other perspective.