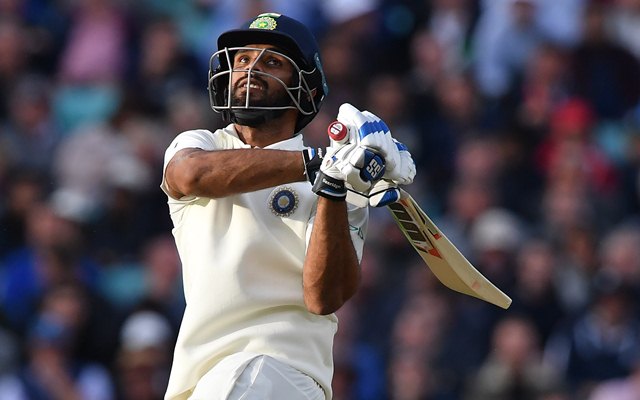 With Cheteshwar Pujara (No.3), captain Virat Kohli (No. 4) and Ajinkya Rahane (No. 5) being automatic choices, India’s batting line-up had two big questions ahead of the first Test against Australia at the Adelaide Oval — who will face the new ball with Mayank Agarwal, and who will man the No. 6 slot.

The latter of those two questions have been answered with Hanuma Vihari making himself almost a certainty for the slot with a century in the day-night warm-up tie against Australia A. In the process, he also ended speculation that India could play two wicketkeepers, Rishabh Pant and Wriddhiman Saha, in the lower middle-order.

Vihari exuded confidence after scoring an unbeaten 104 off 194 deliveries on Saturday, the second day of the three-day warm-up tie under lights against Australia A.

“2018 was my second international tour. It was a challenge for me back then although I contributed a little I thought. Now, I feel I am very well-equipped with my game and I am pretty sure with my game-plan as well. So I am looking forward to the series,” Vihari said on Sunday after the match ended in a draw.

Pant impressed with a 73-ball century in the game, sharing an unbeaten 147-run partnership with Vihari, and could take the wicketkeeper’s role ahead of Saha, who made a couple of ducks and a half-century in the two warm-up games. Although Saha remains India’s best wicketkeeper, Pant’s batting skills and his experience of scoring a Test hundred in Australia may give him the No. 7 position in the line-up, assuming India go in with four specialist bowlers.

Vihari said about who among the two will be picked but noted the benefits of a “healthy competition” within the team for positions.

However, questions remain on who will partner Mayank Agarwal at the top. Agarwal did well as an opener during India’s previous tour of Australia, scoring two half-centuries in both Tests he played and averaged 65. Since that Australia series, Agarwal has played with Rohit Sharma and Prithvi Shaw at the top of the batting order. In the warm-up match against Australia A, the 29-year-old right hander made a patient 61 in the second innings.

Rohit had done well as opener last year with phenomenal scores against South Africa at home but missed the two Tests in New Zealand early this year due to injury, leaving the slot open for Prithvi Shaw. Shaw went on to make just one fifty in four innings during the tour while failing to go past 20 in the other three.

Shaw has also failed to rack up big scores in the two warm-ups, his best being a 29-ball 40 in the first innings of the second warm-up. The 21-year-old right-handed batsman, who scored a century on Test debut in 2018 but has played only four Tests, is also coming off a poor run in the second half of Indian Premier League.

KL Rahul, who was the vice-captain in the limited overs leg of the Australia tour, scored 76 in the second ODI and a 51 in the first T20I. In the rest of the white ball matches, Rahul scored 12, 5, 30 and 0. He opened the innings on in the T20I series with Agarwal and Shikhar Dhawan being chosen at the top of the order for the ODIs. Despite the middling returns, Rahul’s extraordinary season in the IPL, in which he was the top runscorer, could make him favourite to open with Agarwal as the other option if Shaw is out of form.

Shubman Gill also has an outside chance but the right-hander succeeded in the second warm-up, the day-night fixture, as a No. 3 batsman, scoring 43 and 65. In the first warm-up, where he played as opener with the red ball, he got a duck and a 29.