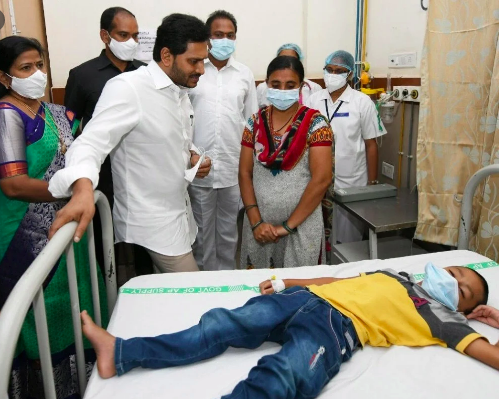 At least one person has died and 227 have been hospitalised by an unidentified illness in India’s southern state of Andhra Pradesh.

The patients had a wide range of symptoms from nausea to fits and falling unconscious, doctors said. Officials are investigating the cause of the illness, which swept through the town of Eluru over the weekend.

It comes as India continues to battle a pandemic, with the world’s second-highest coronavirus caseload.

Andhra Pradesh has been one of the worst-affected states – at more than 800,000, it has the country’s third-highest case count. But Covid-19 doesn’t appear to be the cause of the hospitalisations over the weekend. The state’s health minister, Alla Kali Krishna Srinivas, said that all the patients had tested negative for coronavirus.

“The people who fell sick, especially the children, suddenly started vomiting after complaining of burning eyes. Some of them fainted or suffered bouts of seizures,” a medical officer at Eluru Government Hospital told The Indian Express newspaper.

Seventy people have been discharged, while another 157 are still being treated, officials said.

The state’s chief minister, Jaganmohan Reddy, said that special medical teams are being sent to Eluru to investigate the cause of the illness. Mr Reddy is also expected to visit the town to meet the patients and their families. Mr Srinivas said that the patients’ blood samples did not reveal any evidence of a viral infection.

“We ruled out water contamination or air pollution as the cause after officials visited the areas where people fell sick,” he said. “It is some mystery illness and only lab analysis will reveal what it is.”

However the opposition Telugu Desam Party has called for an enquiry into the incident, insisting that contamination was the cause of the mystery illness.

Andhra Pradesh’s West Godavari district officials are yet to reach a conclusion on the cause of Eluru’s mysterious illness but suspect that lead or organochlorine or a combination of both might have caused the outbreak.

“It is a case of neurotoxin which is either lead or organochlorine or it can be both,” Himanshu Shukla, Joint Collector, West Godavari district, said.

Eluru, which is 58 km north-east of Vijayawada and the headquarters of West Godavari district, is a coastal paddy cultivation and aquaculture hub near the Bay of Bengal on the east coast of India.

Shukla said seven to eight teams of experts from reputed institutions have come to this conclusion, even as they continue medical examinations and investigations to completely demystify the disease.

Heavy metals such as lead and nickel were found in the blood samples of the victims while organochlorine pesticide was found in water.

“Whatever was there, it is not there now, because the number of cases has reduced drastically,” Shukla added. He called the outbreak a ‘point source epidemic’.

“What can be said now is that it was a point source epidemic. Like it was not everywhere, it has come from one particular thing which was an acute intoxication. It was not like it was happening for several months or days,” said Shukla.

Trying to figure out the route taken by the toxin into the body, officials have sent samples of vegetables, water, milk, rice and other items from the affected areas for testing.

“Now what is the food source? I have already told you, we have taken a lot of samples of vegetables, water, milk and rice. Results will come only by Thursday late evening. Only then can we pinpoint what was the cause,” Shukla added.

Symptoms of the mysterious illness include three to five minutes of epileptic fits without repetition, forgetfulness, anxiety, vomiting, headache and back pain.

“This is what has been finalised till now, either it is lead or organochlorine or both. We are working backwards as I told you before,” said Shukla about the elimination method being followed by the experts to rule out various possibilities.

At a time when people are pointing fingers at the quality of drinking water in Eluru and its vicinity, amid other things, as the culprit for giving rise to the mysterious illness rattling West Godavari district headquarters, it is pertinent to understand the decades long struggles numerous villages in this district are going through, bereft of filtered drinking water.

Located on the west side of the Godavari river in the southern state of Andhra Pradesh, West Godavari is a lush green rice bowl, whose agriculture is nurtured by the irrigation system laid by legendary British engineer Sir Arthur Cotton more than a century ago.

Blessed by the Godavari river, major part of the district has abundant supply of water all through the year, barring the summer season.

“Though we have plenty of water, we do not have filtered drinking water. The water supplied by the panchayati tank is not fit for drinking and this has been the case for more than three decades now,” Vantabathina Prakash, a resident of Kalla village, said.

This village is not alone, as there are several like this. Two more adjacent villages to Kalla, Seesali and Doddanapudi, have the same problem.

Achanta, Undrajavaram and several other villages have no respite from this scourge as government after government and the panchayati officials turned a blind eye to their plight.

“For nearly two decades, many people in these villages have got used to buying drinking water or travelling to neighbouring villages to fetch water which is better than what their village panchayati tanks supply,” said Talluri Raj Kumar, a villager.

Moved by the lack of potable water, a few generous NGOs such as Vegesna Foundation, Nandi and others have set up water filtration centres, selling 20 litres at a subsidised price of Rs 10.

However, a few enterprising individuals have also found a business opportunity in this problem to diversify into selling ground water after filtering it.

Just like the panchayati water, ground water in these villages is not potable as it is salty.

Further aggravating the drinking water issues in this geography, aquaculture and prawn processing and export companies have come as a severe bane.

Transforming centuries old agricultural practices such as growing paddy, many farmers have turned towards cultivating fish and prawn for better returns than farming and selling rice.

After converting swathes of paddy fields into fish and prawn ponds, many farmers are releasing the water from the ponds laden with months long feed, medicines and chemicals into the irrigation canals.

“This is a very serious problem as this water will contaminate the entire irrigation network of canals which supply water for paddy cultivation. Some are earning higher profits through aquaculture but some are also giving up paddy cultivation,” highlighted Kumar.

Some paddy farmers are also forced convert to pisciculture because water from a neighbouring aquaculture farmer’s pond seep out to contaminate their paddy fields, leaving them with no other option.

On Tuesday, Palakollu MLA Nimmala Ramanaidu tabulated all the expenses being incurred to cultivate one acre of paddy field nowadays to arrive at a figure of Rs 48,000.

Across West and East Godavari districts, there are several prawn processing, packing and exporting companies which openly dispose their industrial waste.

For instance, a small stretch of land by the Bhimavaram and Gudivada main road reeks with unbearable stench between Seesali and Jakkaram villages after crossing one such company.

The contaminants from the company flow into a ‘bodhe’ (a small canal), leading to the devastation of ecosystem there, killing coconut trees and totally polluting a bigger water body on the right side of the road.

These companies deliberately dispose of their untreated waste, with hardly any regulation to restrain them as government officials seldom pay attention.

According to people from these villages, unavailability of filtered drinking water is an utter shame as they cannot believe that Godavari villages are going through this crisis because of government apathy.

Will the officials and the government wake up after the Eluru crisis? We have to wait and watch as muddy water continues to be supplied in these areas.