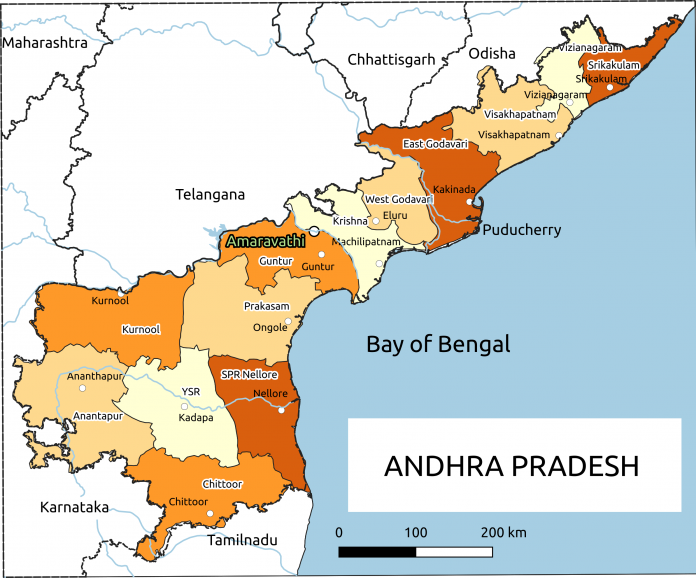 Bharatiya Janata Party – a Political force in India is now very ambitious to get into power even in the states where the party’s existence is hardly felt.

Starting from Assam and spreading to every North-eastern state, the party might have similar plans and approaches to expanding south.

Southern states like Karnataka have already given BJP a chance, while Telangana is being considered as a Potential state, and the preparations are being done since last year when it won 4 Parliament seats in the 2019- General elections.

It has a solid base in Malabar state, and efforts are made to fight the ruling LDF. Tamil Nadu will be gripping as the enthusiastic State BJP president is on a statewide tour, and the possibility of partnering with ruling AIDMK can’t be ruled out either.

The most Potent state Andhra Pradesh is now prioritized, and time has to answer whether BJP will be a significant political force in the state. Andhra Pradesh was bifurcated from Telangana in 2014. Telugu Desam Party aligned with Bharatiya Janata Party and formed government in the state and center as well.

In the 2014 general elections, the BJP won four MLA seats and two MP seats in alliance and also got Ministerial posts in the state government. In the 2019 general elections, when the BJP performed better than it did in the last term at the national level, the AP state leadership show was abysmal. TDP broke the alliance and supported UPA, while BJP went on to fight alone with no alliance. BJP lost Andra Pradesh terribly.

However, in the last one year, the national party has been elevated to a place in the state’s political arena where it enjoys respect and camaraderie. The YSRCP, which won on a massive scale, is also facing political and financial crises, making it a fertile place for BJP to grow in the state.

The Issues that can favor BJP to take on the YSRCP government are :

Ever since the YSRCP took over the state, allegations were made on the government that it favors religious conversations in the state. The century-old wooden chariot of Lakshmi Narasimha Swamy temple was set on fire in the East Godavari district, and many other Hindu places of worship were vandalized. People feel that the government has not done enough to arrest the Culprits in such cases.

TTD Tirumala Tirupati Devastanam Board has been in the news for controversies, including hiking the ticket fare and selling the Devasthanam board’s assets. This angered the Devotees of Balaji, and the government has to roll back its decision. In all these issues, BJP made serious allegations against the government and took an active part in the protests.

Apart from these issues, the YSRCP government is targeted for its appeasement politics, like giving Honoroium to Imam and Pastors. But still, people fear demographic changes with increasing conversions throughout the state, and BJP will encash the sentiments and try to improve their vote base. The local right-wing organizations and RSS will extend their support to BJP as they have hardly any option left as every party is busy in Pseudo-Secular Politics.

Under Chandra Babu Naidu, Amaravati was chosen as the capital of Andhra Pradesh, but things turned upside down with the change of government. Despite the opposition from local farmers and citizens, the Jagan government has gone ahead with this massive move of shifting the capital, and the resources of Amaravati will be a mere waste and puts an extra burden on the public exchequer.

In the already existing financial problems, the CM of AP has stuck on to his Welfare schemes for which he was voted for. The Financial stress of state is high, and it might lead to serious mismanagement if unchecked.

It may be noted that the AP government has already borrowed ₹60,811 crore loans, which is 125% of the estimated amount for the year. At the same time, the revenue deficit deepened to over ₹50,000 crores in the eight months up to November. The period’s revenue collections remained only 35% of the projections in the annual budget of 2020-21.

Andhra Pradesh is known for its Caste Politics. TDP has a solid vote base of the Kamma Community. In contrast, Jana Sena has Kapu Community, and YCP has the support of Reddy Community and SC, ST, and Minority Communities. The caste equations change for every election. BJP, an ally of Jana Sena, has started social engineering, and now it has a State unit president from Kapu Community.

The Power Star Pawan Kalyan’s Party is also seen as a potential threat to the existing government as the Jana Sena Supremo has the requisite ability to bring in Radical changes in Politics.

If the YSRCP takes BJP for granted, they will have to face the hurdles like TRS faced in the recently held GHMC elections.