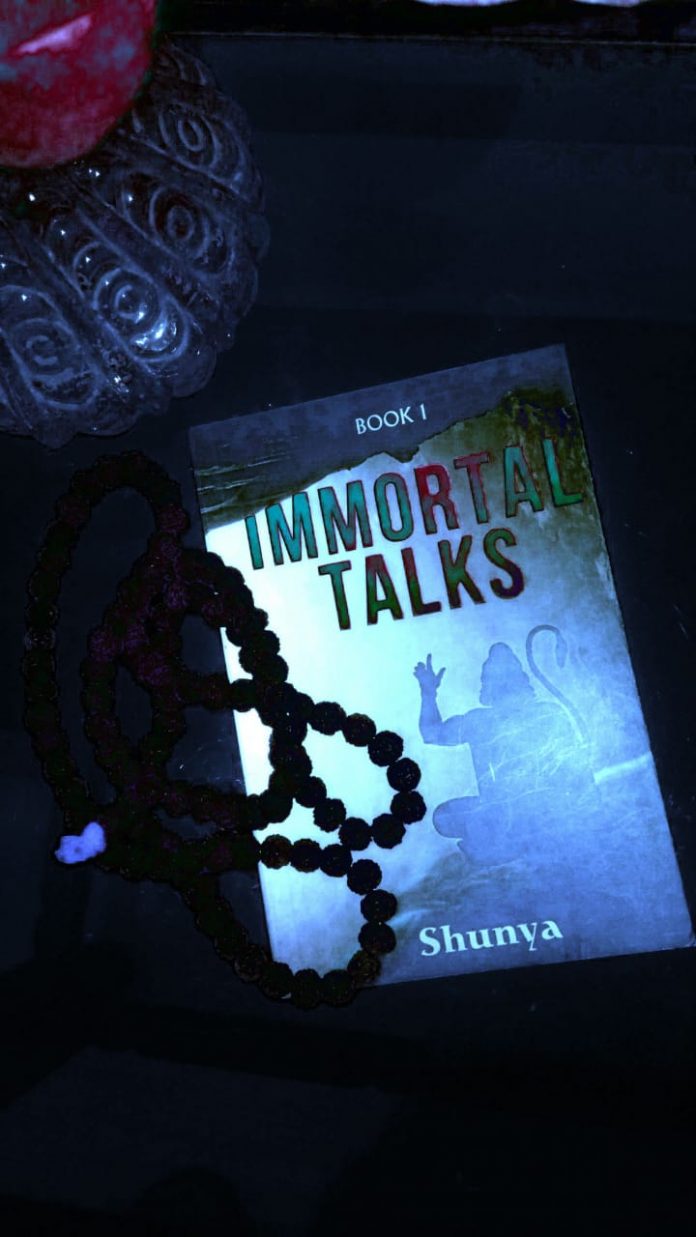 Do the Gods speak to us? Do they watch over us as we acknowledge them in our morning prayer? Do they guide us as we perform our karma everyday that ends into endless dusk and dinner? Are the Gods also with us as we unwind knots in our mind under the stars every night?

If they are, how do I share the happiness and sorrow of my days with Them? Would they come visiting once in a while, if not everyday, to teach us how to live?

‘Immortal Talks’ is an unusual book by Shunya that had a limited number of copies for sale when it first appeared online on the Seer Books website. The blurb, price of the book and the mysterious cover depicting a silhouette of Lord Hanuman was irresistible. Even though one would ordinarily be skeptical about buying mystical books without thumbing through them, ‘Immortal Talks’ was put into the shopping basket almost immediately as part of a wish list.

However, the thought of not being able to read the book since it was available for a limited time, and the excitement soon saw a copy arrive home. One read through the first three chapters, essentially stories that are strung together by characters and called it a night. The third chapter, ‘Describing the Indescribable’, has a narration by Lord Hanuman which was mathematical and abstract. It is written simply but not easy to understand. The book, however, continued to remind one that this was a narrative that was very different from one that I had ever read before.

It is now that one picked up the book again after meandering through several others, as is wont to happen to anyone who begins reading several books simultaneously. This time, I read all the chapters of the book together over two or three nights.

‘Immortal Talks’ is a fascinating journey into notions of Death, Disease, Karma, Illusion, Desires all weaved into legends of the Mahtang Tribe. The Mahtangs are described as a community which prefers isolation from the world and are devotees of Lord Hanuman who visits them once every 41 years. What was astonishing about the book was its appearance as another legend about Lord Hanuman living in the world even today. While one such story has become popular through conversations, these were stories in written form by authors who called themselves Shunya.

The book begins with the chief of the Mahtang Tribe going to the cliff where Lord Hanuman appears once in every 41 years with two women from his tribe to settle a dispute between them. What follows is a gripping story about learning and knowing human behaviour which has its karmic roots in other lifetimes. There are dilemmas about reality and delusion even in the wise mind of the chief who undergoes a shift in consciousness on encountering Lord Hanuman, knowing fully well that the powerful encounter could be the reason for his state of being.

He even begins to question whether he actually saw Lord Hanuman. But unable to speak to his wife or anybody else from the tribe about it, there is a realisation that something is amiss.

The stories would have you believe that the Mahtang world is very different from our world, and perhaps, the authors can sense this curiosity by bringing in three characters from the outside world who are following the Mahtangs for greater knowledge. One of them is Hanudas, who has lost his wife and child to Death and Disease in the normal world. Thoroughly disillusioned, in a mood best described by the book as jaded and numb, he experiences a dissonance in his world-view when he thinks he sees a flying monkey through a car window. The flying monkey, in hindsight, settles into the fluttering flag on the car that has a symbol of Lord Hanuman engraved on it.

Instead of viewing this experience as bizarre, unreasonable, even outlandish, his guru explains how this could have happened to him. My mind, trained to disbelieve such an incident in real life, is actually willing to understand the possibility of a disillusioned mind having an experience beyond this reality, after reading the story in this book.

I see reading ‘Immortal Talks’ as opening up a learning process, possibilities of seeing things differently, all that reading a book can help achieve. It also makes me realise how my own reaction to human beings who might be going through suffering or turmoil in their lives could be gentler, even if I am unable to understand concepts like Delusion, Illusion etc.

The themes of Death, Disease, Karma, Delusion, Illusion are recurring in the chapters with beautiful stories about ‘The Alternate Mother’, ‘The Mermaid’, ‘Strings of Time’ and represent a drama that unfolds in the life of the Mahtangs. The tribe in turn, becomes representative of a community that arouses curiosity and wonder by their actions and livelihood. It seems almost surreal to encounter so many stories at once, almost at times making it difficult to understand the concepts and their application in my daily life. Perhaps the book invites a second reading, maybe the depths of the mermaid world needed a deeper dive than the character of Urva took, the second-in-line to be a Mahtang Chief. Or perhaps I need to improve my mathematical skills 🙂

In any case, ‘Immortal Talks’ is a pithy book with a plethora of stories and ideas to share. One would recommend this flight of fantasy, though, to the brave-hearted! For it is not an easy encounter with concepts such as Values, Rebirth and Time. Hope you have fun reading it as much as I did.