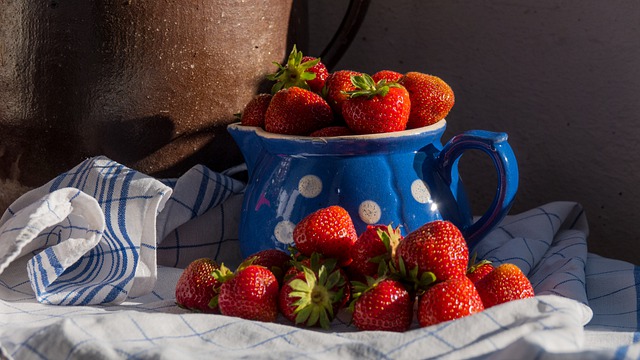 Strawberries are everywhere today – in our cakes, jams, sweets, and ice creams. Anyone can buy them from the local grocery store, but there was a time when there was no commercial strawberry. Wild strawberries were the only thing then before science, and global trade made it possible to get the delightful tasty and red fruits to be available.

Origins of the Name

The name strawberry takes its root from the Old English word ‘streawberige’. This is because it sends out the runners which look like straws. However, some others disagree and stated that it was the acts of using straw as mulch material for strawberry that led to the name we have today while some insist it was because it was sold on straws as snacks.

Strawberries are native to the North American continent, and it is abundantly clear that the Native American Indian tribes incorporated them in many of their meals. The first set of colonists in America made sure they sent the native and bigger strawberry plants across the Atlantic. This was done as early as the beginning of the 17th century.

The Spread of Cultivation

But even before the colonists sent the plants to Europe, records show very clearly that as at the 1300s, cultivation of strawberry was already done in Europe, and it commenced when the French started the transplanting of wood strawberry (Fragaria vesca) from the wild to home gardens, and the trend continued.

By the end of the 1500s, the musky strawberry (Fragaria moschata) was also cultivated all over gardens in Europe. In the following century, the Virginia strawberry (Fragaria virginiana) of the North American continent was sent over to Europe by the colonists as stated earlier. The spread of this resilient but new species happened in stages, and it took a while before it was appreciated.

It would not be until the end of the 18th century and towards the beginning of the 19th century before gaining popularity in England. It was at that period that the gardeners in England were working on getting new strains from seed. Their actions led to a rise in the number of the varieties from three to approximately 30 – an impressive leap.

In the same period, a spy from France had introduced the Chilean strawberry (Fragaria chiloensis) from the Latin American nation to France. This variety stood out from the others because of its bigger size. However, it was not resilient, and growing it was very hard.

What happened was that these two species from the New World were crossed by European gardeners and they came up with the modern strawberry (Fragaria ananassa) even if it happened by accident the first time. It was the same spy from France who mistakenly did pollination of the one he brought from Chile with the one sent in from Virginia.

The remaining part of the work with the breeding was done by the English gardeners and it is because of their efforts that we can enjoy the fruits today. It is noteworthy that every single one of the modern strawberry varieties that we all enjoy today came from this hybrid of Chilean and Virginian strawberries. Still, it did not happen in a day.

The leap from native species to the modern variants took a lot of time, and the cross-breeding of two species followed by the hybridization of the descendants then backcrossing to their original parents. This was then followed by a meticulous selection of the fruits with the most preferred characteristics, followed by more breeding.

The very first American strawberry variety that was a hybrid was called Hovey, and many of the strawberries today came from it. It is named thus because it is the brainchild of Charles Hovey who did the cross-breeding in Massachusetts in 1834.

Over time, more breeding and cross-breeding would continue until we have all the varieties we have today. In this era, China leads the world to produce strawberries, with about 40% of the world’s total output. Other countries that are major producers include the United States, Mexico, Egypt, Turkey, and Spain.