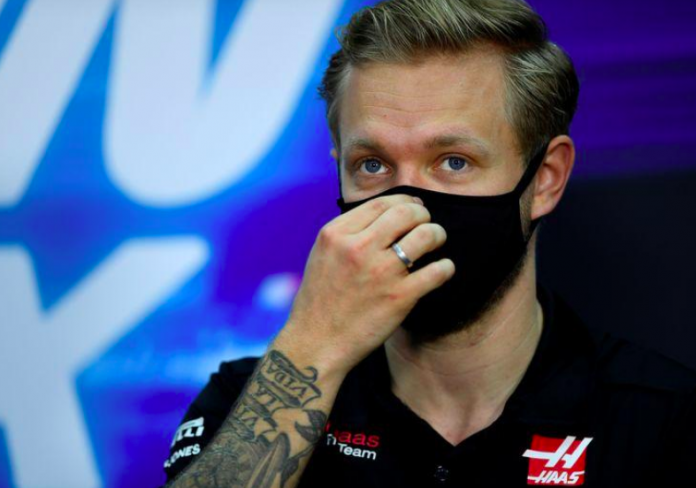 Formula One driver Romain Grosjean relived Sunday’s horrific Bahrain Grand Prix crash, where his Haas car penetrated a metal barrier and split in two, in a video news conference on Friday. This, in his own words, is how he escaped the fireball.

“For me it wasn’t quite 28 seconds, it felt more like a minute 30. When the car came to a stop I opened my eyes. I undid my seatbelt straight away. The thing I didn’t remember on the next day was what did I do with the steering wheel? Because I don’t have the memory of taking the steering wheel off and they said no, the steering wheel was gone between your legs. The column and everything broke and went down.

“I feel like something is touching my head so I sit back down in the car and my first thought was ‘I’m going to wait, I’m upside down against the wall so I’m going to wait until someone comes and helps me’. I wasn’t in stress and obviously not aware at the time there is fire.

“Then I look right and left and watching on the left I see fire. So I think ‘I don’t really have the time to wait here’. So next thing is I tried to go up a bit more on the right, it doesn’t work. Go again on the left, it doesn’t work, sit back down and then I thought about Niki Lauda (who suffered severe burns in a 1976 crash), his accident.

“I thought it couldn’t end like this. It couldn’t be my last race, couldn’t finish like this. No way. So I try again and I’m stuck. So I go back and then there’s the less pleasant moment where my body starts to relax. I’m in peace with myself and I am going to die. I ask my question: ‘is it going to burn my shoe or my foot or my hand, is it going to be painful, where is it going to start?’. I guess it was milliseconds at the time.

“And then I think about my kids. I say ‘No, they cannot lose their dad today.’ So I don’t know why but I decide to turn my helmet on the left hand side and to go up and try and twist my shoulder. That sort of works but then I realise my foot is stuck in the car. So I sit back down, pull as hard as I can on my left leg, the shoe stayed where my foot was but my foot comes out of the shoe. And then I do it again and my shoulders are going through (the halo) and I know I’m going to jump out.

“I’ve got both hands on the fire at that time. My gloves are red normally so I see especially the left one changing colour and starting melting and going full black. I feel the pain that my hands are in the fire but also the relief that I am out of the car. Then I jump out and go on the barrier and I feel Ian (Roberts, FIA doctor) pulling at my overalls so I know I am not on my own any more and there is someone with me.”

After the extraction and immediate checks in the medical car, Grosjean walked to an ambulance. He insisted on that: “It was key that there was some footage of me walking towards the ambulance. Even though I’d walked out of the fire, I needed to send another strong message that I was OK.”

Formula One’s governing body opened an investigation into Romain Grosjean’s Bahrain Grand Prix crash on Thursday as the French driver hailed those who helped him escape the fireball.

The International Automobile Federation (FIA) also made changes for this weekend’s race at Sakhir, adding two rows of tyres and a conveyor belt at the turn three scene of Grosjean’s accident.

A kerb between turns eight and nine was removed to reduce the risk of a car becoming airborne and the depth of the barrier on the right side of turn nine was increased to four rows of tyres.

Grosjean suffered burns to his hands after his Haas car split in two, penetrating a metal barrier and erupting in flames, in Sunday’s race.

The Frenchman left hospital on Wednesday and in an Instagram post accompanying video footage pointed to “the moment I realized I was going to live”.

He highlighted the professionalism of the marshal with the extinguisher and FIA doctor Ian Roberts.

“I told him he was a hero, he went into the fire as much as he could to save me,” he said of Roberts.

“I felt Ian’s hands pulling me over the barrier and knew I was safe. I remember every second of it and life will never be the same again, but I’m sure for the best,” added the driver.

“I met with death and that is the worst feeling I ever had. But I’m alive and will enjoy every second of life and every small win in a much better way from now on.”

The FIA expected its investigation to take six to eight weeks. It will look at all safety devices, how the safety barrier performed and the role of track marshals and medical intervention team.

The body said it would work with Formula One, Haas and the Grand Prix Drivers’ Association (GPDA), who had already been contacted for input. Grosjean is one of the three GPDA directors.

The FIA said immediately after Sunday’s accident that the impact measured more than 50G, while Haas said the car’s last recorded speed was 221kph.

“With so much data available in Formula One, it allows us to accurately determine every element of what occurred and this work has already begun,” said FIA safety director Adam Baker.

“We take this research very seriously and will follow a rigorous process to find out exactly what happened before proposing potential improvements.”

Grosjean careered off the track at high speed on the opening lap of last Sunday’s Bahrain Grand Prix.

The Frenchman’s car speared into the barriers in a 53G impact, that split it in half, and burst into flames bringing the race to a temporary halt.

“It didn’t quite feel right to go back and race after that,” Magnussen told reporters via video conference at the same Sakhir desert track which will host a second race around its shorter outer circuit this weekend.

“Suddenly you wake up from this dream world where you walk around thinking that nothing’s going to happen and you see a crash like that and it just suddenly becomes real.”

Magnussen, 28, is one of the sport’s hardest racers and has made no secret of his admiration for those who drove in a more dangerous era of Formula One when the risk of death was far greater than it is today.

The Dane said he had been worried about Grosjean despite seeing him walk away, in replays played repeatedly during the stoppage, because of the risk of complications from any potential internal injuries.

The 34-year-old Grosjean, who miraculously escaped with little more than burns on the back of his hands and no broken bones, returned to the scene of the accident on Thursday.

He thanked the FIA’s medical delegates and marshals, including one who ran across the track with a fire extinguisher that bought Grosjean time to get out of his car and allowed the Formula One doctor Ian Roberts to help him to safety.

“You were the man that crossed the road?” he asked the marshal. “Your reaction, your attitude, I saw the video, your awareness of where I was in the car.

“Thank you for saving my life.”