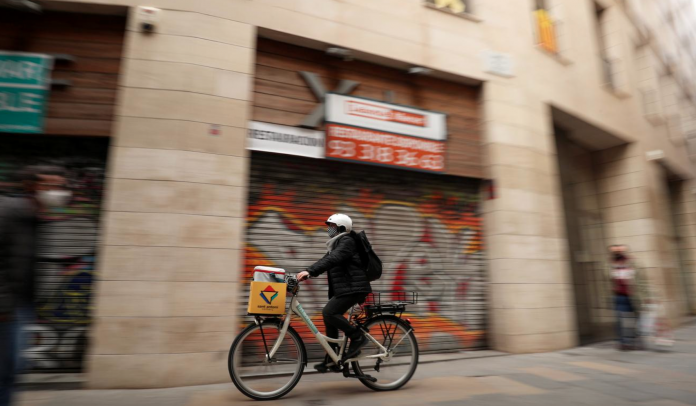 When the coronavirus slammed Spain in March, Ariadna Serra realised that 2020 and beyond looked dreadful for the cycling tours for foreign students company she co-founded ten years ago.

So Serra, 41, and five of her female co-workers explored new opportunities over virtual drinks. They decided to follow their passion for cycling to fund a delivery company using bikes in Barcelona, aiming to benefit from the online shopping boom prompted by the pandemic.

Les Mercedes, as the company is called, was founded in July by the six women and is run by five of them, aged 35 to 45 from Spain, France and Argentina. It is organised as a cooperative and describes itself as “ethical, sustainable and inclusive.”

“It’s not only a delivery company. We want to go a bit further,” said Serra at the company’s headquarters in Barcelona’s old town.

Above all, it intends to be an “alternative model” to delivery giants, such as Amazon and Glovo, she said. Both have lost rulings in recent months in Spain over labour conditions and the rights of so-called gig economy workers.

Amazon’s impact on local shops is at the forefront of a political debate in Barcelona and the municipality is mulling a tax on big online shopping platforms. Barcelona’s mayor Ada Colau has called on residents to boycott Amazon during the Christmas season and shop locally.

“Shops and bars are the culture of our neighbourhoods. What we want is to join forces with them so that they can remain there and adapt to the changes,” Serra said.

Les Mercedes has around 50 core customers, mainly groceries, wine and flower shops as well as neighbourhood shopping associations which have launched their own online marketplaces.

“We bring gender perspective to a sector that is very masculine,” said Marie Dufouleur, 42, another company founder.

Remembering the tough start from scratch when the women had to use their savings, she said: “I think no-one thought we would do it so quickly and so well.” She said the year would end with money in their bank accounts.

Serra said of 2020: “It has taken our job away but given us another. Despite everything, we are pretty happy.”