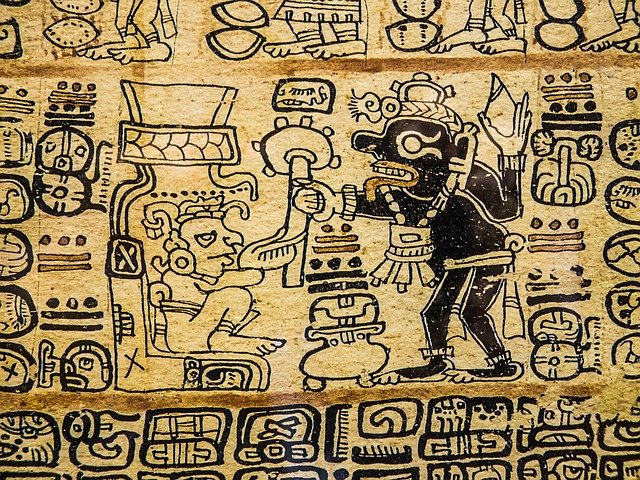 The Aztecs, who inhabited modern-day central Mexico, had a complicated system of beliefs based on gods who directly influenced humans’ lives, including those who controlled the rising sun, fertility, and rains.

The four kids settled they wanted to create a world with humans to live in it. Huitzilopochtli and Quetzalcoatl made the first try, commencing by making fire. This fire turned into the sun, but only half a sun, because it was not bright or big enough to light their entire world. They then made the first woman and man, which they called Oxomoco and Cipactonal, respectively. Their many kids were called macehuales and were to be the land farmers. From there, they invented time and then the inferno known as Mictlan. They made 2 gods to govern this underworld called Mictecacihuatl and Mictlantecuhtli.

Eventually, the world demanded a real sun, so Tezcatlipoca took it upon himself to convert himself into the sun. This is known as the era of the first sun. During this time, they also produced giants to walk the earth. Quetzalcoatl, believing his brothers’ reign had remained long enough, hit him from the sky with a hammer, and he fell into the rivers of the earth. Outraged, he rose from the water as a Jaguar and killed all the giants to extinction. Once he annihilated everyone, he rose back up into the night sky and transformed into the constellation Ursa Major. Quetzalcoatl then became the sun, birthing the era of the second sun. To get vengeance on his brother, Tezcatlipoca threw a colossal blast of wind at the world, driving his brother and many of the macehuales away. Some macehuales withstood the wind blast, but they were transformed into monkeys and fled to the forests. In the third sun’s age, Tlaloc finally took over and became the world’s new sun. He is the god of rain who makes everything sprout. Quetzalcoatl came to overwhelm the world again, this time with rain made of fire, turning all people into birds in this age. He then gave the earth to Tlaloc’s wife, Chalchiuhtlicue (goddess of streams/rivers, and all manners of water). During her rule, rain came and flooded the world, turning the macehuales to fish and making the sky fall, covering the earth so nothing could remain there. Therein completing the age of the fourth sun. Finally, understanding how they had failed due to their bickering, Tezcatlipoca and Quetzalcoatl settled their issues. They turned themselves into trees on either edge of the world, using their tree branches to hold up the sky. Their father, Tonacatecuhtli, saw this correction of their mistakes and gave them the skies to rule, with a road of stars that we now know as the Milkyway.

There are many tales of how the age of the 5th and final sun came to be. One legend tells of how Tezcatlipoca took a flint and used it to make fires to light the earth again before considering what should be done with his siblings. They decided to create a new sun that feeds on the blood and hearts of humans. To feed it, they made five women and four hundred men. This is where the account goes into different directions. Some say that both Tlaloc and Quetzalcoatl wanted their kids to become the new sun, so they each threw their kids into one of Tezcatlipoca’s fires. Tlaloc waited for the fire to smoke out before surrendering his son into the embers, so his son became the moon. Quetzalcoatl chose to throw his son directly into the hot blaze, so he became the fifth and last sun that we see in the day today.

Another legend tells of the gods’ gathering at the old city of Teotihuacan to discuss how to make a new sun. A god named Nanahuatzin, the god of disease, tried to throw himself into the fire and become the new sun. Being a sickly and weak god, the others thought he should not be the one to do it and that a powerful and more stronger god should be the sun.

Tecuciztecatl, a very wealthy god, came forward and said he would do it but could not find the strength to jump into the flames. Nanahuatzin, with little uncertainty, then threw himself into the fire. Seeing his courage, Tecuciztecatl decided to jump in too. They were both transformed into different suns, but the light was now too dazzling to see anything, so one of the other gods threw a bunny at Tecuciztecatl, reducing his glare and transforming him into the moon. Nanahautzin, now the new sun, was reborn as Ollin Tonatiuh. The problem they had was that he would not move from his place in the sky unless the other gods lost their blood for him.

So a god named Tlahuizcalpantecuhtli, lord of dawn, threw a dart at Tonatiuh but just missed. Tonatiuh then threw one back at Tlahuizcalpantecuhtli, directly hitting him in the head and transforming him into Itzlacoliuhqui, the god of frost, coldness, and obsidian. Recognizing that they could not resist, the other gods offered their chests to him, and Quetzalcoatl cut out their hearts with a divine knife. With the blood of the gods, Tonatiuh started to move across the sky in the same way that we see to this day. Quetzalcoatl took the ornaments and clothing of the sacrificed gods and wrapped them in bundles, which the Aztecs then worshiped.