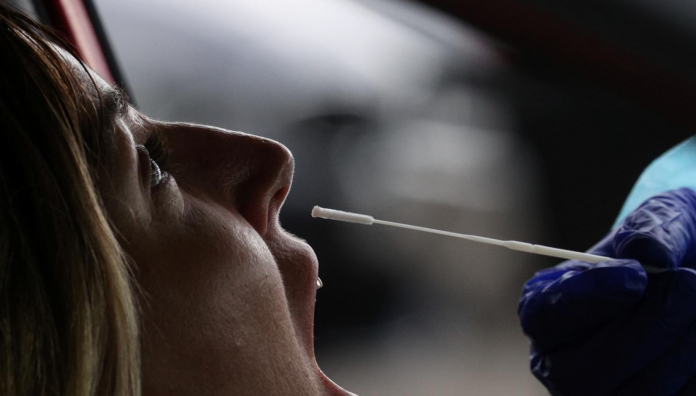 Australian states and territories on Friday begun imposing border restrictions after 28 COVID-19 cases were detected from a cluster on Sydney’s northern beaches, with fears the number of infections will rise.

Health authorities fear the cluster may have spread to other areas of Sydney, Australia’s most populous city, as they have yet to determine the source of the infections.

NSW has urged about a quarter of a million residents in the affected suburbs in Sydney to stay home for three days.

“My anxiety is we have not found the direct transmission route and we cannot be sure we have blocked the transmission line,” said NSW Chief Health Officer Kerry Chant.

Hospitals in the affected suburbs and pop-up testing sites have been inundated with many people waiting hours to be tested.

Major public facilities in the northern beaches area, such as swimming pools and playgrounds, have been closed and visitors have been banned from age care facilities.

All beaches along the 29 km (18 miles) stretch of the coast have been closed until Monday.

Restaurants in the area, which were gearing up for a big Christmas trade, said they were having mass cancellations.

The new border restrictions threw Christmas travel plans for thousands of people into chaos on Friday.

Many people flocked to Sydney airport to try and fly out of the state, fearing hard border closures. Some travellers who left NSW were placed in immediate hotel quarantine for 14 days when they landed in another state.

Queensland state and the Northern Territory demand people who have been on the northern beaches to quarantine for 14 days. Western Australia state imposed this on anyone from NSW.

Until this week, Australia had gone more than two weeks without any local transmission, allowing most states and territories to remove nearly all social distancing curbs.

Such was the optimism that Australia on Thursday projected its economy will recover from its first recession in three decades faster than previously anticipated after containing the spread of COVID-19.

“We have dealt with this before, we’ll deal with it again, it’s important that people remain calm about these issues,” said Prime Minister Scott Morrison. “There is no magic formula that makes the pandemic just go away.”

Australia has reported just over 28,000 coronavirus cases and 908 deaths since the pandemic began and estimates most active cases in the country are returned overseas travelers in hotel quarantine.

NSW said on Friday that it had fined 13 crew from a LATAM Chile flight to Sydney $1,000 each for allegedly failing to follow orders and self-isolate.

As a result of the breach, the state will now require international flight crews to undertake mandatory quarantine in a handful of government-designated hotels.