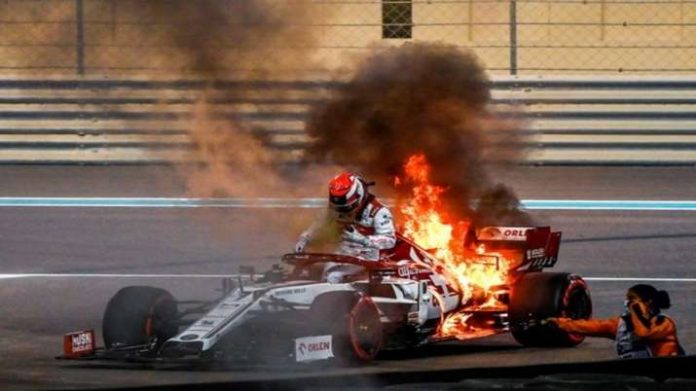 Just two weeks after Haas’s Romain Grosjean’s horrific accident which saw the driver miraculously escaping after his car burst into flames, veteran driver Kimi Raikkonen had to escape his Formula 1 car during the second free practice ahead of the Abu Dhabi Grand Prix after it got engulfed in flames.

Raikkonen, 41, had to pull over his Alfa Romeo after its rear got engulfed in flames. The situation only became worse after he stopped the car. Raikkonen was his typical calm self as he got out of the car and then went on to direct the marshals where to spray the fire extinguisher before taking control of an extinguisher himself.

“You have a big fire — get the hell out of there quick,” was the call from Raikkonen’s engineer as the Finn parked up.

Raikkonen seemed to have been encumbered climbing out of the car by his radio wire. However, when asked if the experience had been scary, the 2008 world champion said: “No, there was nothing scary about it. It was just a shame it catches on fire and then obviously it gets all messy afterwards with trying to put the fire out. It’s one of those things.”

Raikkonen said he won’t speculate about the cause of the fire. “I don’t speculate and we will see. For sure there is some damage, hopefully it is mainly bodywork, but we’ll see. Obviously it’s a different engine and gearbox than we run tomorrow, but yeah, it’s just a bit more work for the guys obviously,” he said.