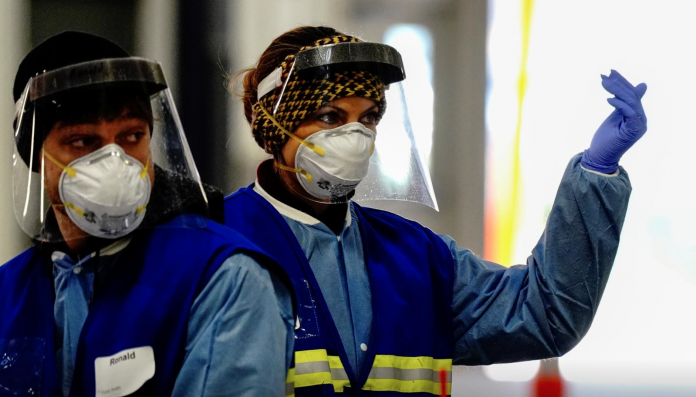 The new decree from Governor Tony Evers, a Democrat, came six months after a coronavirus stay-at-home order issued last spring was invalidated by the state Supreme Court in a lawsuit that Republican lawmakers brought against the lockdown.

The same court heard oral arguments on Monday in a similar lawsuit brought by a prominent Wisconsin conservative donor contesting Evers’ authority to impose an earlier face-covering mandate, which is due to expire on Saturday.

Although medical experts insist that masks are one of the most effective means for breaking the transmission cycle of the highly contagious respiratory virus, mask-wearing has become deeply politicized.

Many Republican politicians, led by President Donald Trump, have belittled or criticized face coverings as an infringement of personal freedom. Democratic President-elect Joe Biden has called masking a “patriotic duty” that he favors mandating nationally.

Statewide mask requirements have been adopted by more than 30 governors at some point during the pandemic, according to the American Association of Retired Persons.

Evers’ decision to extend Wisconsin’s mask order for another 60 days marked the latest in a flurry of new restrictions by state and local officials nationwide to bring down COVID-19 cases soaring out of control again with the onset of winter.

“Wisconsin hospitals are overwhelmed and facing staffing shortages,” Evers said in a press release. More than a third are operating at peak capacity, with COVID patients occupying about a third of all intensive care unit beds, he said.

Average daily case numbers are running at more than 6,200, nearly double the case loads seen a month ago, Evers said.

His new health order requires everyone to wear masks in enclosed spaces except at home when no one from outside the household is present. Enclosed spaces are defined as including outdoor bars and restaurants and public transportation.

Children younger than 5 years of age are exempt, as are individuals who have breathing difficulties.

While hospital beds are filling up with COVID-19 patients, renewed clamp-downs on social and economic life across the country have stoked a resurgence of another ominous sign from the early days of the outbreak – panic buying.

Walmart on Friday said it was “seeing pockets of lower-than-normal availability” for toilet paper and cleaning supplies in some communities.

Shoppers in a half dozen U.S. cities told us that disinfecting wipes were sold out at some major discount retailers and major grocery chains.

Earlier in the day, Dr. Deborah Birx, a member of the White House coronavirus task force, appealed to Americans to avoid unnecessary travel and limit social gatherings during next week’s Thanksgiving holiday.

Birx said more than half the United States has been designated as a COVID-19 “red zone,” where the virus is rampant, and urged Americans to include only immediate family in Thanksgiving celebrations next Thursday.

“This is faster, it is broader and what worries me – it could be longer,” Birx told CNN. “I think it’s on all of us right now to make sure it’s not longer.”