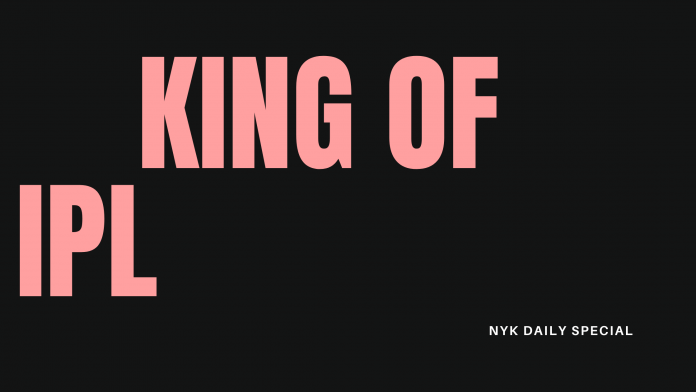 Ever since its inception in 2008, IPL continues to be a cricket revolution with a global impact. Taking a cue from IPL, several other cricket boards also launched domestic T20 contests soon, including Big Bash League, Caribbean Premier League, Sri Lanka Premier League, and many more.

However, what sets IPL cut above the rest is the quality of performance that each player produces every time they represent their franchise. Every cricketer retains their best for the IPL.

Let’s take a look at some of these players who have performed outstandingly well throughout the IPL. But, only one person deserved to be called the King of IPL. Who is he?

One of the world’s most terrific all-rounders of all time, Watson, spearheaded his team’s bowling and batting department on several occasions. He had prominently represented Rajasthan Royals (RR) at IPL before switching to Chennai Super Kings (CSK).

He has recently announced his retirement from all form of cricket, including IPL. The Indian Premier League 2020 is his last outing any competitive cricket tournaments.

He has been a vital cog in the wheel for his team in T20 leagues and international cricket. The former Aussie captain was a go-to man for his team and meticulously handled all responsibilities entrusted on his shoulder so far.

He’s the 12th highest run-getter in IPL and 18th highest wicket-taker throughout all editions of the IPL.

With 3874 runs (including 4 tons, 21 fifties) and 92 wickets (including 1 four-wicket haul) from 145 matches, it’s impossible for anyone in future to replicate his success as a core all-rounder.

Lasith Malinga skipped IPL 2020 for a personal reason. However, Mumbai Indians (MI) know his importance. He’s been a consistent magician with the ball in his IPL career.

IPL can never forget the way Malinga singlehandedly turned IPL into a bowler’s playground. He troubled all big batsmen in his illustrious career. His statistics speaks for itself; Claiming 170 wickets in just 122 matches is surreal and only Malinga can do it!

Who can forget the Lankan pacer’s last over at IPL 2019 finale? He successfully defended 13 runs in the last over in front of Shardul Thakur and Ravinder Jadeja of CSK to help MI win their fourth IPL title.

As far as IPL bowlers are concerned, Malinga is second to none. He scalped crucial wickets for Mumbai Indians at a much-needed time.

Virat Kohli is the most consistent player in all formats of the game in the post-Sachin Tendulkar era. His splendid form with the bat can be a nightmare for any opponents. That’s why he is the prime target of his opponents at every match.

However, the Kohli’s only regret is an IPL title as a RCB skipper. It continues to evade him. Still, you can’t take away the credit of Kohli as a phenomenal batsman. In 2016, he created a run riot with 973 runs with four centuries at an average of 81!.

Virat Kohli is only the second Indian after Sachin Tendulkar to have won MVP (Most Valuable Player – 2016) tag in IPL history.

In the long list of IPL batsmen, David Warner remains the most consistent batsman. He has represented several franchisees throughout his IPL career. He scored 500+ runs in each of the subsequent editions of the IPL tournament from 2015 to 2019. He played a crucial role in SRH’s winning campaign of 2016 when he had amassed 692 runs in 12 innings only.

The SRH captain hammered 5150 runs in 139 matches with 4 tons and 47 half-centuries at a brilliant strike rate of 142 and a remarkable average of 43.

When it comes to the King of the Indian Premier League, then only one person deserves that title – Chris Gayle.

A week ago, he smashed his 1000th sixes in the T20 format making him the only player to accomplish this feat. You can call him an entertainer, crowd puller, pinch hitter, but deep down inside – you know he is the undisputed match-winner. He is inspiring and, the veteran cricketer’s mere presence can make a big difference. His mere inclusion in Kings XI Punjab, this year, infused the lost passion in the team.

IPL players often rise to the occasion, and do everything possible to help their team win. In Gayle’s context, he amassed 4772 runs in just 132 innings with 6 centuries and 31 fifties at an average of 41 and 150+ strike rate.

In the current edition of the IPL, he could participate in only 7 matches for Kings XI Punjab. Yet, he left an indelible mark with 288 runs at a stunning average of 41. He played a valiant 63-ball 99-run knock (including 8 towering sixes and 6 boundaries) against RR.

In the early phase of IPL 2020, Punjab opted to keep him out of playing XI for reasons best known to the franchisee only.

After all, which team wants to keep a player of Gayle’s caliber out of playing XI? Only when Punjab started losing too many matches, they brought back Gayle. It paid off as Punjab started winning once the Caribbean return to fold. But by then, KXIP were already out of IPL play-offs!