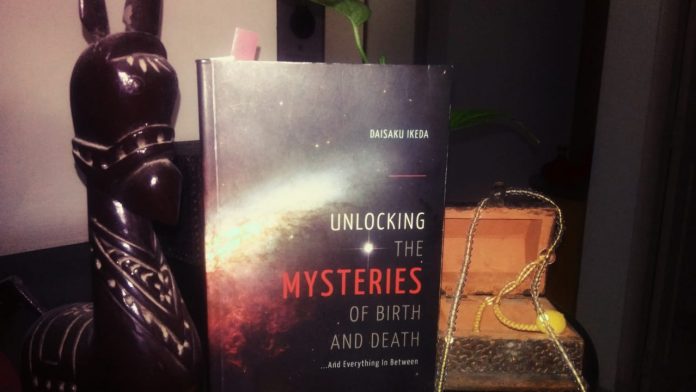 Imagine winning a seat on a spacecraft and travelling into the unknown trying to unlock the mysteries of birth and death with nothing but a book (of colossal proportions!) and the universe ahead of us. For that matter, imagine putting on safety gear and a safety belt before encountering hitherto non-existent thoughts about birth and death. I heard a rumble inside my head when my brain first began to think in this direction.

Now imagine holding this book in your hands that has a map to the unknown, and just by looking at the cover you know you are in for the best time of your life trying to fetter your impatient imagination down to earth.

If one goes straight to the time when I first encountered the book “Unlocking the Mysteries of Birth and Death…and everything in between” by Daisaku Ikeda, a sense of wonder and amazement filled the gaps in the pockets of memory between the time when I kept aside the book to sit, and think about that brief first encounter. I didn’t even register those moments in my distracted dailiness. Such is the profound effect of Daisaku Ikeda’s modern rendition of Nichiren Buddhism’s worldview, a 13th century reformist philosophy from Japan propagated by the sage Nichiren Daishonin.

Have you ever wondered why we live our daily lives without ever pondering upon aspects of human life that impact not just our own existence, but the entire world? Is birth ever a part of daily conversation the way activities at a shopping mall are, to quote an example of mundane activity from everyday? Why is a new born baby brought home with sheer joy, but without much thinking about where it came from, or how it evolved? In a brilliant exposition between the four universal sufferings of birth, ageing, sickness and death as described by the Buddha and scientific descriptions of the processes of human life that affect us from our birth to death, Dr. Ikeda surmises that the overarching philosophy of Buddhism can help us all live a life of absolute happiness. It just needs to be practiced as ardently as Nichiren did, who called himself ‘a practitioner of the Lotus Sutra’.

The Lotus Sutra is known as Saddharma-pundarika-sutra in Sanskrit. It is considered as the essence of all of Buddha’s teachings and the only text which says that every human being can achieve their enlightenment in this lifetime itself, so long as they instil their faith in the Lotus Sutra.

The best translation of the Lotus Sutra is dated back to the Indian Buddhist scholar Kumarajiva (344 CE-413 CE). This translation is still the backbone of Soka Gakkai International’s activities which is the largest lay Buddhist organisation in contemporary times. Having completed 90 years of assiduous promulgation of Mahayana Buddhism and the Mystic Law, the organisation has 12 million+ followers in 192+ countries of the world.

The members practise their faith in the Mystic Law as part of their daily living, setting goals for their ‘earthly desires’ to reach a zenith in their Buddhahood- an indestructible state of happiness described by Nichiren. This absolute happiness is profoundly connected to an individual’s life span and how he lives through the four aforementioned universal sufferings described in Buddhism.

Increasing one’s lifespan through faith while accepting death in order to joyously celebrate the wonder of life – this is one of the ultimate aims of the philosophy of happiness, and the book.

The Mystic Law may seem a mystery to many who remain untouched by the beauty of this practice.

‘The word myoho means “Mystic Law”. The Law (ho), or ultimate reality, is described as mystic (myo) because it is beyond all conceptions and formulations of the human mind; it is infinitely profound.’ (pg. 173)

The mysteries of birth and death, as described in the book…and beyond are the cosmos that is governed by the Mystic Law. To fathom it is difficult, to measure it is to seam the stars together in the night sky. Just like the formations of constellations, the human mind can perhaps make patterns and guide themselves till a certain milestone, or a point in this world. But the ultimate destination is arrived at by the boundless wisdom of this mystic Law.

‘If we have faith in and practice the Mystic Law, we will come to realise that our own lives are eternal.’ (pg.92)

The notion that our lives are limited to the span of birth and death as we experience them in this time for perhaps, 80-100 years as parents, mothers, fathers, sisters and relatives sometimes struggles to breakthrough by itself, when we wrap ourselves in the boundless raptures of practising the Mystic Law. Faith lifts our life condition up to achieve a sense of belonging with the entire cosmos, and therefore the eternal.

‘When we base our lives on this Law by practising Buddhism as Nichiren teaches, we can tap the limitless power inside ourselves so that disease is no longer a matter of despair. In fact, the opposite is true: empowered by the Mystic Law we can transform disease into a source of growth, joy and true fulfilment.’

At a time in the year 2020 when a global respiratory infection has rendered more than 55 million people sick, it is heartening to note that faith-based practices like Nichiren Buddhism speak of a life lived well due to illness, seen as growth of an individual who goes through tough times. The cornerstone of this world renowned reformist philosophy is living a joyous life, no matter what the circumstances maybe.

Buddhism travelled through the Asian continent to reach Japan around 552 CE. In 1253 CE, Nichiren established the teaching of faith in the Lotus Sutra through the chanting of its essence, now widely known as chanting the daimoku of Nam-Myoho-Renge-Kyo. The daimoku of Nam-Myoho-Renge-Kyo has the power to breakthrough seeming impasses in karmic tendencies, that can drastically transform life conditions known to be imbued in sufferings of birth, sickness, ageing and death. Devotion to the Mystic Law and a firm, dedicated practice can not only yield results in an ordinary individual’s life but can transform the destiny of an entire nation through the human revolution of one individual.

This reviewer is a consistent practitioner since a year and holds everything acknowledged in this book review to be true.