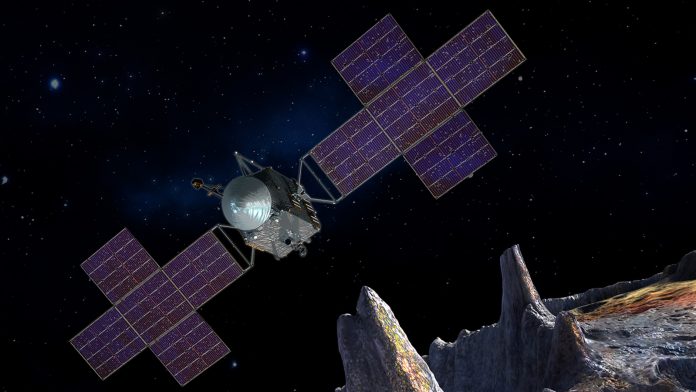 As per the latest study published in Planetary Science Journal, Asteroid 16 Psyche, our most exciting prospect candidate for asteroid mining, is cited for having rare and extremely high-worth metals estimated to have a worth of 10,000 quadrillion dollars ($10,000,000,000,000,000,000). This amount of money is enough to make every single human on Earth a multi-billionaire.

Asteroid 16 Psyche, located about 370 million kilometres from Earth, is one of the dozen most massive objects in the solar system’s Main Asteroid belt orbiting Sun between the orbit of planet Mars and Jupiter. It is over 200 KM (or 120 miles) in diameter, and it is believed to an exposed core of protoplanet (or an early planetary embryo that wasn’t able to take from a full main planet). Psyche is the Greek word for Soul, and the 16 represents that the asteroid was 16th object to fall under category Minor planet in order of discovery.

NASA scientists and planetary scientists believe that Psyche 16 is made up of almost entirely of Iron, nickel and several other rare materials like gold, platinum, iridium, etc., just like our planet Earth’s unexposed core.

Of course, Psyche 16 can’t be brought to Earth by any means or technology available to or made by humans. However, mining of the same is far much more possible and plausible. Moreover, If the asteroid was somehow brought to our planet and its resources were extracted, it could eventually collapse the markets and economies.

NASA is already planning a launch a mission to Psyche 16 in about 2 years when it will launch a spacecraft to study the asteroid using a SpaceX Falcon Heavy rocket from Cape Canaveral, Florida.

This unmanned spacecraft is estimated to reach the Psyche 16 in early 2026, following a Mars gravity assist in 2023. The prime objective of the mission is to capture a quality images of the asteroid, and to map it from a distance.

The mission’s secondary objectives are to determine whether the asteroid is, in fact, the core of an early planet or if it is merely made up of rare material that coalesced together during formation and to determine its age and origins.

Psyche 16 was discovered by the Italian astronomer Annibale de Gasparis on March 17, 1852.

It referred to the form of space exploration where metal-rich asteroids or minor planets are exploited for their raw material and high-value minerals/metals.