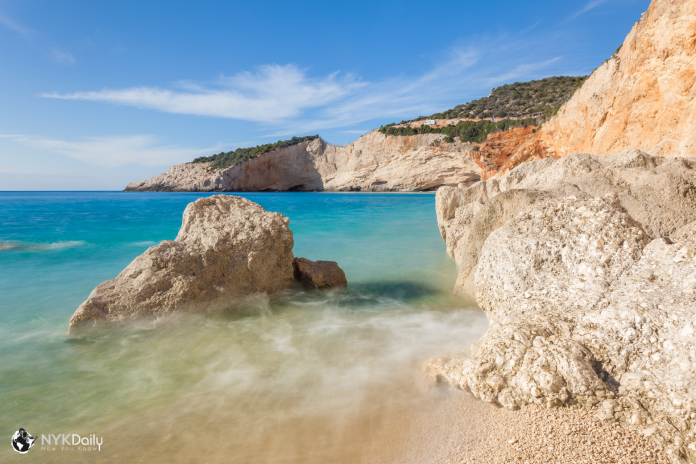 Even though you have numerous roads that terminate at Lefkada, it is largely untouched by tourism.

Lefkada is a mesmerizing town where its soaring peaks still hide wild olive groves and timeless villages. Lefkada’s rugged west coast holds some fantastic beaches. Only along the east coast are there enclaves; if you keep walking all the way south, you’ll find beautiful little bays and channels, as well as stormy conditions that attract windsurfers and kitesurfers globally.

Lefkada has initially been a peninsula, not an actual island. Corinthian colonizers cut a canal through the narrow isthmus that connected it to the rest of Greece in the 9th century BCE.

How to reach and move around Lefkada?

If you are planning a bus ride, Athens is about 5 hours with several journeys per day. The airport, near Preveza, is 25 minutes drive from Lefkas town, at the north tip of the island, with regular local connectivity.

A rental car/bike is a practical mode of transportation in Lefkada. Numerous shops around the main Vasiliki road has a decent selection of Mopeds, Mountain Bikes, and Quad Bikes for hire at cheap rates. There are also many other car rental sites in the resort of Lefkas and Nidri Town.

Although the roads leading to remote Egremni was crushed by an earthquake in 2015, you can still visit the best-beach in Greece via a boat excursion. Since the mid-1990s, this secluded beach has become one of the premier tourist destinations on the island and Europe. You can explore fantastic water sports, poetic waves, and bathe in its magical turquoise waters.

Established in the medieval era, Moni Faneromenis is a monastery set in stunning hilltop gardens 3km west of town towards Agios Nikitas. The climbing is rewarded with majestic views over the city and lagoon. The complex contains an impressive little museum and – one for the children – a small zoo with deer and parrots.

West along the harbor in the cultural center, this world-class museum illustrates island memoir from the pre-historic era to the Romans. Prize presentations include terracotta collections from the 6th century BCE representing a flute player enclosed by hopping nymphs, seen as proof that a Pan cult once thrived on Lefkada.

Straight, broad, and thoroughly delightful Mylos Beach is a quick walk west over the cliff from Agios Nikitas. It remains undeveloped and a perfect place to unwind. Don’t forget to carry sunscreen if you are visiting Mylos beach.

Above the local library, and opened on demand, this gallery exhibits icons from Russia and the Ionian school from 1500. The two finest, often on loan elsewhere, is believed to have inspired the painter El Greco.

The once-mesmerizing beach at Porto Katsiki, near the island’s southern corner, sustained significant earthquake damage in 2015. As the wreckage washes away, it has started to heal, but the uncertain walkway that formerly crossed to the headland lies in ruins. You can explore the beach by road.

What to eat in Lefkada?

Vasiliki bay’s harbor is home to around two dozen fast food outlets and restaurants, all of which have romantic seating outside next to the shores.

Food available at the harbor varies from traditional Greek cuisine to simple meals such as burgers and fries with chips and is comparatively cheap. Two people can eat a large meal and drink wine for under 20 Euros. The most favorite beers at the bars in Vasiliki and Nidri are Amstel and Mythos. There is a winery on the island, which makes “Lefkadian Land White,” a white wine which can be bought in restaurants and supermarkets.