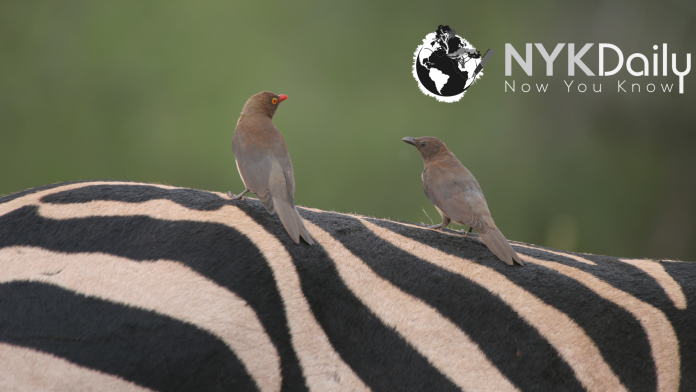 Animals establish different kinds of relationships, and these are studied in biology. One such relationship is the one named mutualism. It is a type of relationship that is of mutual benefit to two organisms involved.

Oxpecker and Zebras – Rub my Back, I Rub Yours

Zebras are equines found in Africa, and they are known for their distinctive and unique coat with black and white stripes. This makes them be one of the most easily identifiable animals. They live mainly in the grasslands, savannahs, shrublands, woodlands, and even mountainous southern and eastern Africa areas.

On the other hand, the oxpeckers are a pair of species of birds that form the Buphagidae family. These birds got their name from their characteristic trait of perching confidently on all kinds of giant mammals, either domesticated or wild, to feed. They focus on small insects, ticks, larvae of botflies, and all sorts of parasites. The animals that are favored by the oxpecker include giraffes, zebras, hippopotamuses, impalas, and rhinoceroses. This article’s focus is going to be the mutualistic relationship that happens between the oxpeckers and zebras.

Oxpeckers are found all over sub-Saharan Africa, and it is not hard to locate them in practically all the open habitats. They are, however, not present in the rainforests and the aridest deserts. It has been noticed that their distribution is directly linked with the presence of their preferred prey which are particular species of ticks and the animals that serve as the vectors of these ticks.

The oxpeckers can contribute some benefits to the zebras because by feeding on the ticks, they help the zebras keep the parasite load to a minimum. This is because the zebras on their own have no way to reduce the tick quantity. These birds have also been spotted eating off dandruff and earwax of the zebras, thus helping them with their hygiene.

The relationship is classified as a mutualistic one because both sides gain. While the zebras are kept clean, and their parasite load is reduced, the oxpeckers also get a steady food source. Without the ready supply of ticks, food may be quite hard to come by for the birds.

It is also certain that the zebras feel discomfort with the ticks’ presence as they cannot remove them on their own, which is where the oxpeckers come into the picture.

More on Relationship between Organisms

In mutualism, there is a benefit for the two organisms that are involved. In commensalism, the pattern is so that one organism gets to gain while the other gains nothing but is not harmed. Then in parasitism, there is no mutuality pattern because only one organism benefits from the deal while the host is harmed. The relationship between the oxpeckers and zebras is a mutually-beneficial one as both parties have something to benefit.