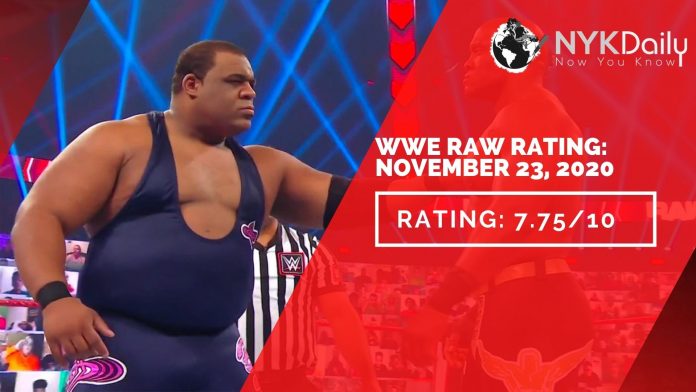 We go right to the ring, and the Men’s Team RAW is already out – AJ Styles with his muscle Jordan Omogbehin, Braun Strowman, Sheamus, Riddle, and Keith Lee. WWE Producer Adam Pearce is also there, and he’s introduced. He talks about last night’s Survivor Series pay-per-view – the celebration of The Undertaker and his “Final Farewell” and the clean sweep by the Men’s Team RAW.

Pearce says the win should come with a reward. He mentions giving everyone a chance tonight to make their case for what sounds like a WWE Title shot. Sheamus interrupts Pearce and says AJ is not his captain. He then congratulates WWE Champion Drew McIntyre and goes on about how he was the MVP last night. AJ interrupts and disagrees. AJ says it looks like Sheamus will use his friendship with McIntyre to get a title shot. AJ says he was the real MVP last night, as the Team Captain. Lee interrupts and says not only did he save AJ last night, he pinned the actual Team SmackDown Captain, making it obvious who should be worthy of this title shot. Riddle says he wants to be WWE Champion too. He says what they all did last night was pretty sick. He pinned King Corbin and wonders if that makes him King Bro.

Riddle says he would beat Drew to become the WWE Champion. Riddle and Sheamus have words now. Pearce tells Strowman to make his case next. Last but not least. Strowman yells at Pearce for that phrase. Pearce apologizes but Strowman grabs him by his collar and starts yelling at him. Strowman wants to be hit. Pearce pleads. Strowman drops him with a headbutt. The other Team RAW members scold Strowman, but he doesn’t want to hear it. We go to a commercial.

The New Day finished a grueling week of competition with a championship rematch against their latest challengers, Cedric Alexander & Shelton Benjamin of The Hurt Business. Benjamin appeared shot out of a cannon early, as the bruising Superstar brought the offense to the mat. After Alexander slyly interfered when the official’s back was turned, Kofi Kingston and Benjamin were counted out before they could reenter the ring. As Kingston & Xavier Woods exited up the ramp, MVP proposed the match continue and appealed to the Raw Tag Team Champions’ pride.

The Hurt Business’ aggression only ratcheted up another level after the match’s restart. After an Olympic Slam from Benjamin, it appeared the Raw Tag Titles were about to change hands. As The Hurt Business’ enforcer lined up Woods for a powerbomb, the fate of The New Day looked sealed, but Woods had one last gasp. A Sunset Flip roll-up from Woods caught Benjamin by surprise, and The New Day escaped with their Raw Tag Team Titles.

Winner: The New Day in 17 minutes.

Match Review: 3.5/5. Good match with a roll-up finish to keep the rivalry going. I am impressed by Xavier Woods, and his moves are always well-executed. Kofi was good as usual.

Earlier in the night, Adam Pearce announced a WWE Title opportunity given to a member of Team Raw as a reward for their Survivor Series win. Braun Strowman offered a monstrous response with a headbutt to Pearce. After some recovery and a conversation with Randy Orton, Pearce proclaimed qualifying matches would take place to set up a Triple Threat Match for a WWE Title opportunity next week on Raw.

Riddle and Sheamus were the first two competitors to battle it out for the coveted spot. The Survivor Series teamwork went out the window, as the rivalry between the two heated back up on Raw. Riddle soared in for a huge Broton, but The Celtic Warrior kicked out and came battling back with 10 Beats of the Bodhrán. Riddle shocked Sheamus when he kicked out after a White Noise from the second rope. When The Celtic Warrior locked in a Cloverleaf, Riddle had one last gasp to counter for the roll-up win.

Match Review: 4.25/5. WOW. The best Matt Riddle match on Main Roster. Incredible match with ‘awesome’ chemistry between two of the most talented wrestlers inside the squared circle.

A night after very different outcomes, Asuka and Lana met in a Raw Women’s Championship Match. The match was quickly derailed by the presence of Nia Jax & Shayna Baszler, and a tag team match ensued after their challenge. The Empress of Tomorrow did her best to fend off the Women’s Tag Team Champions, but Baszler trapped Lana in the Kirifuda Clutch. As the match seemed headed for a conclusion, Asuka swooped into roll-up Baszler to get the win and help Lana escape without a crash through the announce table.

Winner by disqualification: Asuka in 1 minute

It was a big vs. bad battle, as Keith Lee and Bobby Lashley shared the ring with hopes of earning a WWE Title opportunity. The All-Mighty put on a jaw-dropping display of strength by lifting Lee onto his shoulders outside the ring and ramming him into the ring post. After Lee broke his way out of a Hurt Lock, MVP rushed into the ring rather than let the colossal Superstar take his client out. Lee dropped the Hurt Business leader and advanced to the Triple Threat Match by disqualification.

Nikki Cross was unable to reason with her former best friend in recent weeks, so she attempted to knock some sense into her in the ring. Cross attacked Bliss from the opening bell, but the wicked Superstar wore a sadistic smile throughout. After another flurry of attacks, Bliss appeared to snap to her senses and cried out for Nikki in the ring. After Cross went in for the embrace, Bliss converted a Sister Abigail and posed over her former teammate for the pin.

Raw’s main event was a “WrestleMania caliber” match between the 14-time World Champion Randy Orton and “The Phenomenal One” AJ Styles. The Viper came out livid on the heels of losing his WWE Title last week and displayed cruel intentions for Styles. Orton nearly put Styles away with a quick strike power slam, but Styles got a shoulder up in the nick of time. As Orton rolled outside the ring, The Fiend emerged behind the barricade and then again on the apron to startle The Legend Killer. Styles took hold of the opening with a Phenomenal Forearm to finalize the field for next week’s Triple Threat Match.

Match Review: 3.5/5. A very good match between two veterans who know each other incredibly well.