Why I call Winston Churchill a genocidal madman 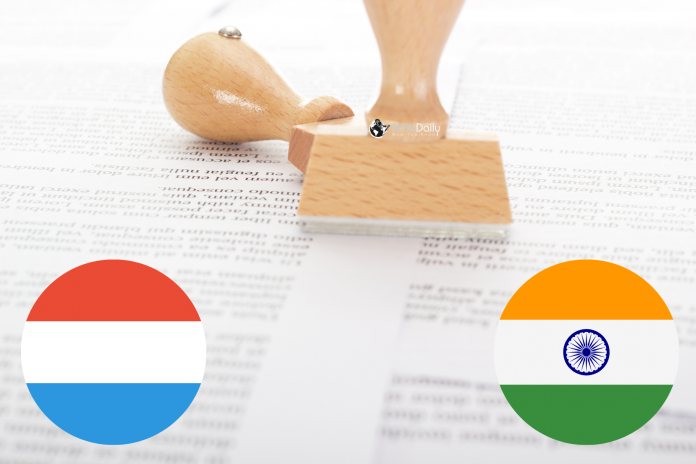 2. The two Prime Ministers underlined the excellent relations between India and Luxembourg based on shared principles and values of democracy, freedom, rule of law, and respect for human rights.

3. The leaders noted with satisfaction the development of cordial and friendly relations between the two countries over more than seven decades since the establishment of diplomatic relations in 1948. They agreed that the bilateral relations have expanded significantly during this period but emphasised the need to tap into the potential of the relationship through enhanced cooperation in areas of trade, finance, steel, space, ICT, innovation, manufacturing, automotive, sustainable development, including through renewable energy, and the fight against climate change.

4. They viewed with satisfaction the high-level engagements between India and Luxembourg. In this context, they looked forward to the State Visit of His Royal Highness the Grand Duke to India, which had to be postponed earlier this year due to the COVID-19 pandemic, on a mutually convenient date, following the improvement in the pandemic situation.

5. The two leaders acknowledged the growing convergences between India and Luxembourg on global issues of mutual interest. They shared the commitment to foster deeper understanding and cooperation between the two countries and, in this context, they welcomed the institutionalization of regular bilateral consultations between the Ministry of External Affairs of India and the Ministry of Foreign and European Affairs of Luxembourg.

6. The two Prime Ministers welcomed the growing economic relationship between the two countries and expressed satisfaction that companies from both India and Luxembourg were expanding their presence in each other’s countries. In this context, they agreed to look at new opportunities for business cooperation. Both Prime Ministers welcomed the signing of a cooperation agreement between Invest India and Luxinnovation to support and develop mutual business cooperation between Indian and Luxembourg companies.

7. The two Prime Ministers also took note of the long-standing cooperation between India and Luxembourg in the steel sector and the leaders called upon businesses, including SMEs and startups, to explore further opportunities for expanding the economic relationship. They also noted that Luxembourg companies were taking a growing interest in India’s various initiatives related to the environment, clean energy and sustainable technologies, including the Clean Ganga Mission.

8. The leaders looked forward to the 17th Joint Economic Commission between India and the Belgium-Luxembourg Economic Union to review the economic and trade relations.

9. The leaders also exchanged views regarding the ongoing efforts to make supply chains more resilient, diversified, responsible and sustainable. They noted that over the last decades, supply chains have become increasingly complex, intertwined and dependent on a diverse set of stakeholders located across the globe. The two leaders agreed that the challenge of future-proofing global supply chains will be to ensure a smooth interplay between interdependence and greater resilience, requiring notably an increased coordination among all stakeholders involved in the value chain.

10. Underscoring the importance of green financing to promote green growth and sustainable development, the two leaders welcomed the signing of cooperation agreements by the Luxembourg Stock Exchange with State Bank of India and the India International Stock Exchange. They also shared the view that the proposed agreement between the regulatory authorities “Commission de Surveillance du Secteur Financier” (CSSF) and the Securities and Exchange Board of India (SEBI) would deepen bilateral cooperation in the financial sector. In this context, they expressed their commitment for further strengthening cooperation in the area of financial services. Prime Minister Bettel highlighted that Luxembourg, as a leading international financial centre in Europe, can act as an important bridge to help connect India’s financial services industry with international markets and reach European and global investors.

11. The two leaders acknowledged the role of the financial industry to support the global transition towards a greener and more sustainable economy. In this regard, they agreed to identify and develop joint initiatives to promote and facilitate the development of sustainable finance. Moreover, the two Prime Ministers underlined the importance of innovation and digitization in the financial sector and noted the potential to connect the financial technology and start-up communities of both countries.

12. The two leaders took positive note of the ongoing space cooperation between India and Luxembourg, including in the domain of satellite broadcasting and communications, and noted with satisfaction that the Luxembourg based space companies had begun utilizing the services of India for launching their satellites into space. They welcomed the successful launch on 7th November 2020 by ISRO of the PSLV-C49 mission, which included 4 satellites from Luxembourg. The two leaders looked forward to early finalization of the cooperation instrument in the area of exploration and uses of outer space for peaceful purposes, currently under discussion between the two Governments.

13. The two leaders agreed that COVID-19 had accelerated the Digitalization process and, in this regard, they emphasized the need for cooperation in the digital domain and its emerging technologies. They noted that both India and Luxembourg are promoting Digitalization through the “Digital India” programme and the”Digital Luxembourg” initiative respectively and agreed to explore convergences between the two initiatives.

14. The leaders noted with satisfaction the ongoing collaboration in the field of neurodegenerative diseases between Indian partner institutions such as the National Brain Research Centre and the Luxembourg Institute of Health and the Luxembourg Centre for Systems Biomedicine. They also noted the existing linkages of IITs in Bombay, Kanpur and Madras and the National Law School of India with the University of Luxembourg and agreed to further expand the cooperation between institutes of higher education and research in both countries.

15. The two leaders noted that both India and Luxembourg share the ethos of non-violence in the current global environment. In this regard, Prime Minister Modi welcomed Luxembourg’s issuance of a commemorative stamp in 2019 to mark the 150th Birth Anniversary of Mahatma Gandhi. Prime Minister Bettel highlighted that the design of this commemorative stamp was based on the bronze bust of Mahatma Gandhi located in the Municipal Park in Luxembourg City, a work of art created by the Indian modernist artist Amar Nath Sehgal (1922-2007), who lived between India and Luxembourg for two decades.

16. The two Prime Ministers agreed that enhancing people-to-people exchanges is essential for strengthening bilateral relations between the two countries. In this regard, they welcomed the positive contribution of the Indian diaspora in Luxembourg, which is rapidly growing in numbers and adding to its rich diversity. To further strengthen mobility, they shared the intent for a swift conclusion of a Migration and Mobility agreement, as well as an agreement on an exemption of visas for holders of diplomatic and official/service passports, between India and the Benelux.

17. The leaders discussed the ongoing COVID-19 pandemic, including its health and socio-economic consequences, and expressed their resolve to combat the pandemic. They underlined the need for global solidarity to respond effectively to the pandemic to ensure sustainable socio-economicpost-COVID-19 recovery, and to stimulate economic development and financial resilience. They agreed to continue their cooperation, including within the India-EU partnership framework, to strengthen preparedness and response capacities, sharing information in a free, transparent and prompt manner, and improving international response including through relevant international organisations, such as the World Health Organisation (WHO).

18. The two leaders acknowledged the importance of the India-EU Strategic Partnership rooted in shared principles and values of democracy, freedom, rule of law, and respect for human rights, for contributing to a safer, greener and more stable world. In this context, they expressed satisfaction at the successful India-EU virtual summit held on 15th July 2020 and expressed support for further intensification of the India-EU relationship, including through strengthening cooperation in areas of common interest in the Indo-Pacific region, and through comprehensive, sustainable and rules-based connectivity. Prime Minister Modi appreciated the constructive role played by Luxembourg over the decades as one of the founding members of the European Union in support of stronger India-EU ties. In this context, Prime Minister Bettel underlined the high priority attached by Luxembourg to further deepening and intensification of India-EU relations and noted that both India and the EU have a common interest in each other’s security, prosperity and sustainable development.

19. The leaders acknowledged that developing the India-EU economic relations will be important in the context of post-COVID-19 economic recovery. In this context, they expressed their commitment to working towards balanced, ambitious, and mutually-beneficial free trade and investment agreements.

20. The leaders expressed their determination to promote effective and reformed multilateralism and a rules-based multilateral order with the United Nations (UN) and the World Trade Organisation (WTO) at its core. They also affirmed their commitment to cooperate in the implementation of the Sustainable Development Goals and the protection of the environment and combating climate change.

22. Furthermore, they expressed their readiness for cooperation to implement the Sendai Framework for Disaster Risk Reduction to prevent new and reduce existing disaster risks, and in this respect, looked forward to India-EU cooperation within the Coalition for Disaster Resilient Infrastructure (CDRI).

23. Prime Minister Bettel welcomed India’s election to a non-permanent seat in the UN Security Council for the term 2021-2022 and reiterated Luxembourg’s support for the reform of the UN Security Council, including its expansion in both categories of permanent and non-permanent membership. Both sides agreed on the need to take the Intergovernmental Negotiations (IGN) process decisively forward towards commencing text-based negotiations in the 75th session of the UN General Assembly with the overall objective of achieving concrete results in a fixed time frame. In this context, Prime Minister Bettel also reiterated Luxembourg’s support for India’s candidature for the permanent membership of the UN Security Council. Prime Minister Modi expressed India’s deep appreciation for the support extended by Luxembourg for India’s candidature to various international and multilateral institutions, including the important role played by Luxembourg in India’s entry into the Missile Technology Control Regime (MTCR) and its continuing support for India’s participation in the Nuclear Suppliers Group (NSG). Prime Minister Bettel expressed Luxembourg’s deep appreciation for India’s support for Luxembourg’s candidatures at the United Nations, including Luxembourg’s candidature to the UN Human Rights Council for the term 2022-2024.

24. Expressing strong concern at continuing threats of international terrorism, including cross-border terrorism, the two leaders condemned terrorism in all its forms and manifestations. They agreed on the need for continued cooperation between India and Luxembourg to support international efforts at the United Nations and at forums like the Financial Action Task Force (FATF) to prevent and combat terrorism.