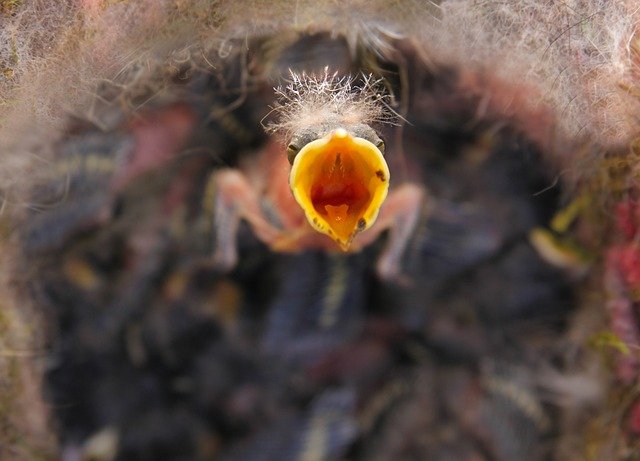 Mother birds show a lot of love towards their babies, and this reflects in everything they do. They invest a lot of time and resources into the care of their young and will go to any length to ensure that they are safe. There is also no discrimination when it comes to feeding the babies – mother birds will never allow their young ones to starve.

That brings us to a pervasive question among birds’ lovers: how exactly do birds feed their babies? The response to this is that a vast majority of mother birds consume the food and then regurgitate the softer portions for their babies. The mother birds have typically been seen feeding insects to their babies, and this is because they contain a lot of proteins. Baby birds need many proteins as they are in the growth and development phases of their lives.

The remaining parts of this article will provide a lot more details on how the mother birds go about feeding their young ones. Let us roll if you are ready!

How do Parent Birds Feed their Young Ones?

Baby birds are weak, tiny, and have to depend entirely on their parents for food. They cannot fly, so they are typically in the nest where they wait as the mother flies out to get food. In most cases, the mother bird will get the food, eat and digest it, then it will regurgitate the food directly into the mouth of the babies. The babies often seem to know when food has arrived because you will always see them with their mouths wide open as they screech whenever they are hungry and in need of some nourishment.

The feeding method, however, varies explicitly depending on the precise kind of species involved. However, what is observed is that the baby bird that makes the loudest noise is given more food than the other young ones. Once the baby bird can open its mouth powerfully, it is a lot easier for the mother or parent to feed it. The baby bird is also in an excellent position to ingest even bigger food chunks.

How Does the Parent Bird Know Which Baby to Give Most Food?

There are some instances where the baby bird does not get the same amount of food. This may be because the baby is ill or cannot express itself properly to the parent that it wants some food.

In many instances, the other baby birds are bigger and can push others aside to get more food. It is observed that different bird species have several modes of sibling rivalry and behaviors regarding food.

The good thing is that the parent bird has a good memory and can detect which one should be fed first and which one has not had anything good to eat. The hungriest one is also helpful in calling attention by ensuring that the screeching is loud and unrelenting. Parent birds also pay close attention to their babies, so they know the one that is swallowing or the one that is deprived of nutrition.

Different parent birds of different species feed their young ones using various kinds of foods. Some use nuts, seeds, and berries. But one thing that is noticed with them all is that they make sure to feed their young ones with insects and a good reason for this. Insects have a lot of protein content, and the baby birds need a lot of it to grow correctly.

Protein helps build up protein, which makes up the muscle and other parts of the baby bird. It can get very intense when feeding baby birds, and some bird species, like the songbirds, have been seen to feed their babies up to 12 times in an hour. They also feed their babies mainly with protein-rich insects and worms, contributing to optimal growth and excellent health condition.

It is possible for some parent birds like sparrows that are known for normally eating seeds to change their diet and focus on insects; this is particularly true of the breeding period. Overall, the mothers usually consume smaller insects, and then they take the much bigger ones back to the nests where they then feed their babies.

There are also some practices that the parent birds engage in when feeding their young ones. The mother birds have been seen smashing the insect against the ground or a tree stump. This kills the insect while softening the exoskeleton and making it a lot easier for the baby birds to eat. There are some other instances when the parent bird will chew up the insect and then grind up the shell to be consumable for the young ones.

Some Parent Birds Give Milk to the Young Ones

It has been noticed that some birds produce milk just like as it has been seen with mammals. A perfect example is a pigeon, and the two genders of the pigeon are known for their copious production of crop milk.

Crop milk is made via the shedding of special cells inside the crop, and this is why it is very nutritious. It is exciting to know that a pigeon’s milk has a lot more protein and fat than the one produced by human beings or even cows.

In the first two days after hatching the eggs, crop milk is usually the only kind of food that these mother birds can give to their baby birds. The two parents typically feed their young ones for about two weeks. Seeds can then be introduced alongside the milk as the babies get older, and the milk proportion gradually tapers off.

Some Birds Feed Their Young Ones at Night Only

A good number of birds are only active at night, and these are the nocturnal species like the owls and nighthawks. Such birds only hunt for insects when they fly at night. Hence, they can only feed their babies at night, as that is the only time that they can source food. But then again, this is not seen with all the birds but in some species. Some other birds feed their young ones almost round the clock.