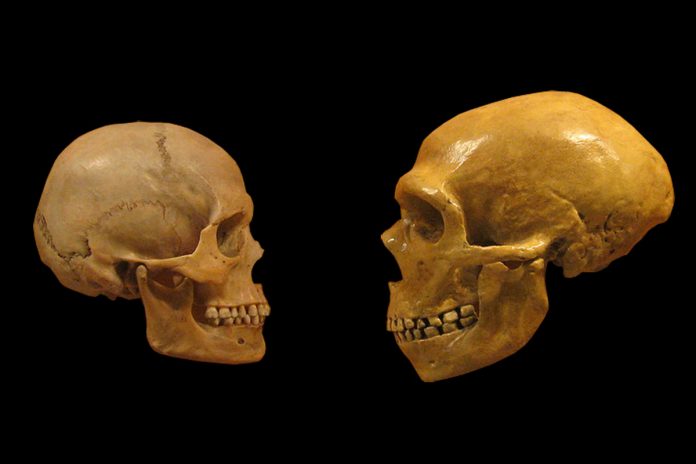 Homo neanderthalensis and Homo sapiens are two of the most prominent species to feature in the recent stages of human evolution. The former is known to most people as Neanderthal, while the other, Homo sapiens, means ‘wise person’ in the Latin language, and it is the only extant human species known to scientists. As for Neanderthals, they were the closest relatives of modern-day humans.

But there are remarkable differences between the Neanderthals. These differences result from ethological, biological, linguistic, anthropological, and a variety of other factors. However, before these differences are discussed in detail, it must be stated that the principal distinguishing factor between the two is that the Neanderthals were primarily sourcing for their food by hunting and gathering. At the same time, the Homo sapiens chose a more stable way of life by producing the food they ate from the domestication of animals and agriculture.

It is also important to point out that Homo sapiens idaltu and Homo sapiens are the two subspecies of Homo sapiens. The modern human that belongs to our generation is the Homo sapiens sapiens, which infers that the one is an extinct subspecies.

Specific differences between Neanderthals and Homo sapiens include the following:

If you happen to stumble upon a Neanderthal today, one of the first things that will strike you as being very remarkable is that the creature is shorter than the typical human. These hominins cousins of ours were a lot thicker and much shorter than we, so do not try to enter into an arm-wrestling bout with them even if you may outrun them.

Another significant difference in the physical characteristic is the way their nostrils are shaped. They are massive, and the nose is flaring with a prominent and broad shape. The exciting thing here is that there is an excellent explanation for it. Some who have studied these differences believe that the shape of the nose was a form of adaption that allowed them to breathe cold air easily and blend perfectly with Europe’s climatic conditions. The nose was not the only part of the body that had remarkable differences. The Neanderthals also possessed brows that protruded, and this was in addition to the chins with considerable weakness. But it appears that they had much more developed jaws than our own.

You cannot notice this difference from the physical appearance, unlike the body’s nose shape and height. There is a remarkable difference between the brain volumes of the Neanderthals and modern-day humans, which is apparent from the volume of the skulls. It is possible that they had brains that were significantly bigger than our own. However, it is not sure if that had any significant impact on their cognitive functions.

What is known is that Neanderthals did not establish aggressive and warmongering societies like human beings. They had bulkier bodies, small foreheads, and expansive bones. Their numbers shrunk so much that by around 40,000 years ago, they were all gone. But it must be pointed out quickly that their disappearance came after they had existed for one million years – much longer than we modern-day humans.

Another main difference between the two was the use of consumption and expenditure of energy. Scientists think that the Neanderthals needed an additional 600 to 700 calories per day compared with the modern human. It is believed that this was to provide energy for their stockier and more resilient bodies. This explains why they bloomed during abundance and suffered immensely during famines. Human beings are a lot more efficient with energy when compared with Neanderthals. This also explains why and how our species were able to outcompete them even with the interbreeding.

Apart from the physical differences, it can be said that there were not more extensive differences that separated modern human beings from the Neanderthals. This was gleaned from their genome following the full sequencing back in 2010. It was discovered that these hominins shared as much as 99.7% of their genetic composition with us, which means that they were almost humans like us. Studies are still ongoing in this aspect, so it is believed that more revelations will be made as science continues its relentless pursuit of knowledge.

It is also confirmed that interbreeding occurs between the two and explains some quantity of Neanderthal DNA in our genomes. Scientists have been able to gain a better understanding of the functions of these genes. They also shed more light on the behavioral patterns of the Neanderthals. A good illustration is concerning the genes from the Neanderthals, which show how our immune systems combat microorganisms. The same study explains how we utilize the protein known as keratin and even how we use the olfactory organ.