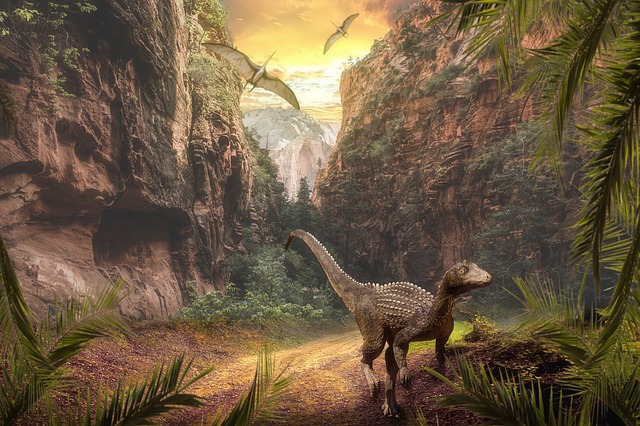 Humans’ evolution is a topic that has been extensively discussed, but that of dinosaurs is even a lot more interesting. Scientists have concluded that dinosaurs’ evolution commenced with a single line of archosaurs around 240 million years ago. Archosaurs are described as a group of diapsids and are generally classified as reptiles.

Evolution Stemming from the Archosaurs

The evolutionary process that led to the formation of the Dinosauromorpha and the first set of true dinosaurs can be traced via fossils of the initial sets of Archosaurs. These include Euparkeria, Erythrosuchidae and Proterosuchidae with their fossils as old as 250 million years. It is believed that the modern-day crocodiles descended from the archosaurs that existed in the mid-Triassic era.

Scientists have defined dinosaurs as the last common ancestor of birds like the Triceratops (Ornithischia), and Saurischia and all the creatures descended from the ancestor. Based on this definition, the pterosaurs and the other kinds of archosaurs were almost not classified as dinosaurs.

The Earliest Set of Dinosaurs

Just as the name implies, it describes the avian pelvic girdle even though they were not modern-day birds’ ancestors. A herbivorous diet changed the dentition and skull of the ornithischians pretty early on.

Others like the Lesothosaurus made their separation early even though the skull was noticed to have adapted, with features like the more flexible lower jaw and the less flexible upper jaw.

Thyreophorans has several structures, but the most prominent include the scutes, which are the surface body armor plates. These had an elongated tail and a blended quadrupedal and bipedal posture that differentiated the Scutellosaurus from the other thyreophorans.

The stegosaurs were easily noticed by the dominant row of plates located on the spine and the elongated spines on the tail. Most of the stegosaurs possessed a spine over the shoulder. These plates and spines have had their evolution from the scutes from prior creatures. Of all the stegosaurs, the Huayangosaurus is the most primitive and the oldest.

The ankylosaurs are also recognized by the presence of the massive body armor. There is also heavy ossification seen in the skull. In the early phase of evolution, the ankylosaurs divided into Ankylosauridae and Nodosauridae, and the differences can only be seen in a skull.

The name for these dinosaurs was derived from the slab located across the back of the skull. Marginocephalia includes the ceratopsians and pachycephalosaurs. Pachycephalosaurs are also known very well for the prominent upper fronts close to the skull. As for the Ceratopsians, prominent members include the Triceratops, Styracosaurus, and the Protoceratops.

The body size is one of the parameters considered when discussing the evolutionary trends of dinosaurs. It is often discussed because of its connection to life history, extinction rate, diet, metabolism, and geographic range. The mobility is another trend of evolution as the earliest dinosaur was a biped, then there was an evolution into the quadrupedal posture.

The evolutionary trend of dinosaurs came to an abrupt end around 66 million years ago with the end of the Cretaceous Period in what is known as the Cretaceous-Paleogene extinction event. This event led to the total extinction of all the dinosaurs except the line that had already led to the appearance of the first set of avian creatures that remain with us today.

The Science behind Talking Parrots