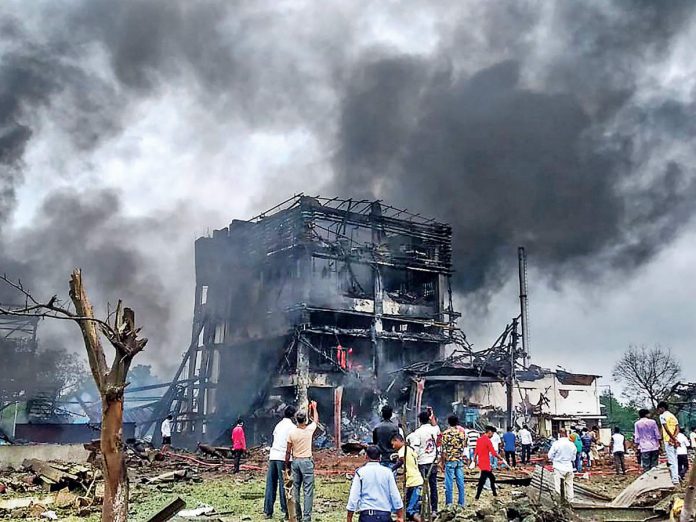 Nine people were killed due to a huge blast and fire in an Ahmedabad cotton mill on Wednesday afternoon. Firefighters have rescued nine others from the site of the blast which razed an entire portion of the building.

According to sources from LG Hospital, the hospital superintendent has confirmed deaths of nine persons.

“Nine persons were brought dead from the site of the blast. We have admitted nine of the surviving persons, the condition of two of them is critical. One of them is serious and the other suffers from intracranial haemorrhage,” a hospital official said.

A major fire engulfed the building following a massive blast in the Nanu Kaka estate situated on the Pirana Piplaj road.

The firefighting teams which rushed to the spot have rescued 18 persons from under the rubble and sent them all to the LG Hospital in Ahmedabad. According to sources in the fire department, the teams are still searching for people feared trapped under the rubble.

“We rushed to the site at around 11:30 a.m. at the place which houses multiple units. The blast and the fire brought down at least 10 to 12 units of this estate. We believe that the blast occured inside a chemical laboratory in one of the units and thereafter a series of explosion followed, consuming half a dozen barrels of chemicals. The blast was so massive that the pillars and beams of this estate were flung 50 metres away, bringing the roof down. Right now the place looks like a war-torn site,” Jayesh Khadia, Deputy Chief Fire Officer, Ahmedabad, said.

“We have been divided in two teams and our team has brought out eight persons from under the rubble, two of which were dead. We have sent all of them to the hospital. It is assumed that there are still three to four persons buried under the rubble. There are around 100-125 people from the firefighting teams and search and rescue. The fire is still burning in half of the portion and our teams are trying to extinguish it,” he said.

Personnel from the police, labour and employment department rushed to the spot on hearing of the blast. Forensic experts from the Forensic Science Laboratory (FSL) are collecting samples to analyse the cause of the explosion.

It is said that the building did not have any clearance from the fire department.

Meanwhile, Gujarat Chief Minister Vijay Rupani has announced aid of Rs 4 lakh each to the kin of the victims who died in the blast. He also ordered a probe into the incident.

“Anguished by the loss of lives due to a fire in a godown in Ahmedabad. Condolences to the bereaved families. Prayers with the injured. The authorities are providing all possible assistance to the affected,” Modi tweeted.

Rupani ordered an enquiry into the incident and entrusted it to Additional Chief Secretary (ACS) Labour and Employment department, Vipul Mitra and also to chairman of the Gujarat Pollution Control Board (GPCB) Sanjeev Kumar.