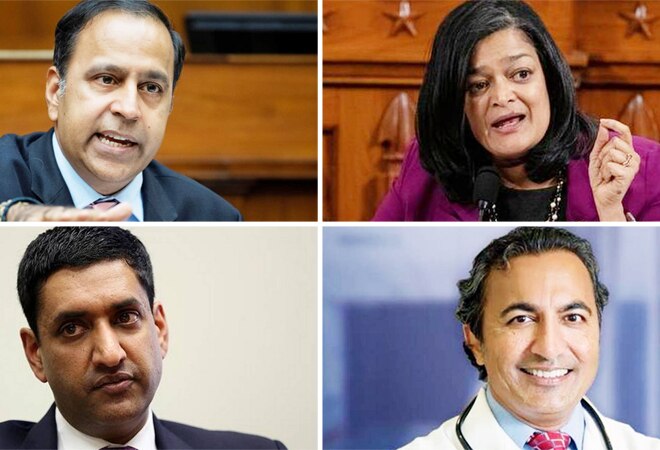 All four Indian American members of the House of Representatives who are fondly called the “Samosa Caucus” will get to have ‘chai’ in Congress again.

The four Democrats won reelection in Tuesday’s election, and another was leading in her constituency while the counting was still on.

Raja Krishnamoorthi was considered such a formidable candidate the Republican Party did not put up a candidate against him in Illinois. He defeated the Libertarian Party candidate by 41.8 per cent.

Pramila Jayapal, a harsh critic of India, won from Washington State defeating her Republican Party rival with a huge margin of 69.6 per cent.

Roh Khanna received 74.6 per cent of the votes in his California constituency to defeat Republican Ritesh Tandon, who got only 25.4 per cent.

Another Californian, Amri Bera was re-elected with a margin of 22.8 per cent over the Republican rival.

But Nisha Sharma, who ran for the House as a Republican from California, was defeated by the sitting Democrat Mark DeSaulnier by 50.6 per cent.

Hiral Tipirneni, an Indian American running for the House from Arizona was leading the incumbent Republican David Schweikert by a slim margin of 3.4 per cent with 29 per cent of the votes still to be counted as of 3 a.m. on Wednesday.

Sri Preston Kulkarni, who was considered a strong candidate lost in Texas by 7.3 per cent after a campaign against him by a combination of Indian secularists, Democratic Party liberals and Islamists alleging he had ties to the Rashtriya Swayamsevak Sangh (RSS).

The former US diplomat had attended Modi’s “Howdy Modi” rally with President Donald Trump in Houston last year and among the contributors to his election campaign was a leader of the Hindu Swayam Sewak Sangh.

Republican Manga Anantatmula, who tried to unseat Democrat Gerry Connolly, lost by 43.4 per cent in Virginia.

Tulsi Gabbard, who is not of Indian descent but is the first Hindu elected to the House, did not seek re-election after having unsuccessfully run for the Democratic Party’s presidential nomination.

In Maine, Democrat Sarah Gideon had been leading the sitting Senator Susan Collins in pre-election opinion polls by six per cent, according to RealClear Politics. But in an upset Gideon lost by eight per cent, even though Biden won the state.

Republican Ritkin Mehta lost the senate race by 22.7 per cent to Corey Booker, the incumbent who also was a candidate for the Democratic Party’s presidential nomination.

At the state level, Niraj Antani was elected to the Ohio state Senate. He was a member of the state House of Representatives for three terms having been first elected when he was only 23 years old, becoming one of the youngest legislators in the country.