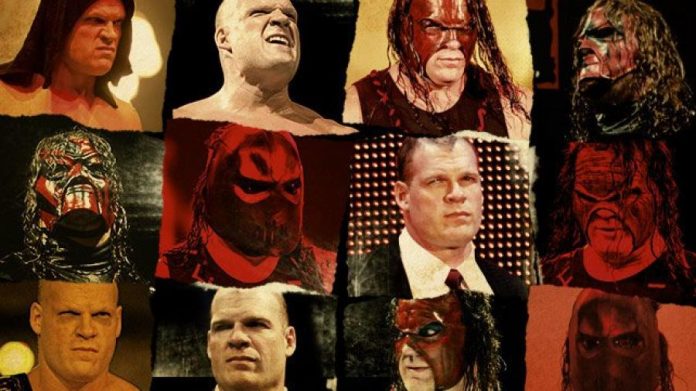 WWE’s Kane (real name Glenn Thomas Jacobs) is an American professional wrestler, author, actor, and politician. He is the Mayor of Knox County, Tennessee. However, today let’s keep politics aside and celebrate Kane’s illustrious career inside the squared circle.

2010 was all about surprises, and I was pleasantly shocked, seeing the winner of the money in the Bank ladder match.

After 50 minutes of the first match, Ry Mysterio fought a gruesome match for the World Heavyweight title against Jack Swagger. Mysterio won the match and celebrated while selling the Angle Lock injuries caused by his opponent. Rey continued celebrating until Kane’s music hit.

Kane marched out with the money in the Bank briefcase in his hands, and he had referee Robinson with him. Kane went into the ring, handed the referee the briefcase, and the bell rang.

Kane kicked Mysterio for a Chokeslam and then a Tombstone for a pin-fall victory in under a minute. Kane won the championship, shocking everyone in the crowd and people watching home. This was Kane’s second run as a World Champion in WWE.

Kane has had several Tag-Team partners, including his kayfabe brother, The Undertaker.

However, the strangest alliance and one of the most successful was with Daniel Bryan, called Team Hell No. In a documentary produced by WWE, Kane admitted that Vince had the idea for both guys to say, “I’m The Tag Team Champions.” Kane said he has an English degree, and they were slaughtering the English language while Bryan remarked it was grammatically incorrect. Kane said it was senseless, with Daniel Bryan saying he thought it was fun and funny. However, when Vince Mcmahon picks something for you, you can’t cross his decision.

Team Hell-No was one of the craziest things either of the two did in their wrestling career. They won tag-team championships, were extremely ‘over’ with the fans, and Kane/Bryan’s hug was a sight to behold. One of the best times of Kane’s Career indeed.

Trust me when I say this. this was the promo where Kane out-promoed Hulk Hogan and The Rock. The Big Red Machine invented television gold, and Kanenite was out of the world. Here is the ‘legendary’ promo transcript.

Hulk Hogan: “You know, brother, I want these guys just as bad as you do. But it’s not just you and me tonight. We’ve got a partner: Kane! Now, I’ve been in the ring with a lotta big, scary dudes, guy. But this guy, he’s scarier than all the rest. I mean, he scares the Hell outta me. Do you think we can trust this guy?”

The Rock: “Well, you bet your ass that—”

Kane: “IT DOESN’T MATTER IF YOU’RE READY! Because tonight, The Rock and Kane team up with Hulk Hogan. And you know somethin’, brothers? Whether it’s the millions [and millions] and millions of Rock fans or 20.000 Hulkamaniacs or 20.000 screaming Kane-o-nites. The question is, brothers: Whatcha gonna do—Scott Hall, Kevin Nash, X-Pac, whatcha gonna do when Hulk Hogan, The Rock and The Big Red Machine RUN WILD ON YOOOOOU?!? WHATCHA GONNA DO? I see you guys out there.”

In 1998, Kane was one of the best and my favorite heels around. He even won the WWE Title from Steve Austin at the king of the ring –thanks to Deadman’s interference—in the best First Blood match ever done. In the closing moments of the fight, Undertaker aimed a steel chair at Mankind, but Foley ducked, and Stone Cold got busted wide open. Kane won his first WWE Title after the referee saw the blood-soaked Austin’s face. The match had the Attitude Era main event feel.

With 11 eliminations, Kane holds the record for most eliminations in a single Royal Rumble Match, and the big red machine lasting for close to an hour is an accomplishment in and of itself.

He was the king, lasting around nearly an hour. This is one of the best Royal Rumble appearances ever, throwing a then-record 11 men over the top round in a 30 man Rumble. The fact that this happened revealed the trust that Vince rightfully had in Kane.

…and who can forget Hall of Famer Drew Carey.

It was at this Royal Rumble when Carey stopped by the New Orleans Arena for an impromptu meeting with Mr. McMahon. The comedian was putting on his pay-per-view event that week and was seeking guidance from the chairman. But after Drew Carey put the moves on Mr. McMahon’s former kayfabe (really?) girlfriend, Trish Stratus, he was talked into fighting in the Rumble by the vindictive CEO.

Joining the fight at Number. 6, Carey was fortunate to join an empty ring and bask in the WWE Universe’s adulation as the first Hollywood star to ever appear in the Royal Rumble match. And then Big Red Monster’s music hit. Kane stomped into the ring through brimstone and hellfire and got into the comedian’s face with a clear intent to harm. A master of improv due to his acting as the host of “Whose Line Is It Anyway?”, Drew Carey tried to get out of the circumstance by extending a handshake and a bunch of money to Kane, but The Big Red Monster choked Drew’s neck anyway. Just when it seemed like Drew Carey was going to be choke slammed back to Hollywood, Raven entered the ring and attacked Kane, allowing the actor to leap over the rope and run out of the arena.

Yup, WWE is known for its weddings (remember Stephnie getting married to HHH in Vegas), but few have ever managed to be as absurd, harmful, and eventually entertaining as the Kane/Lita ceremony.

Who can forget Lita’s scorn-filled pledges to her hubby-to-be? (“You are a vile, awful man with no soul,” she spat at him.) Or Kane’s vicious laugh?

Here is how the storyline went.

After losing to The Undertaker at WrestleMania XX, Kane fell in love with Lita but was rejected. This led to him kidnapping Lita, and on the same night, Kane won a battle royal for a Heavyweight Championship match against Late Chris Benoit at Badd Blood. Six days before Bad Blood, in a fun tag team match between La Resistance and Kane against Edge and Chris Benoit, Kane beat Chris Benoit. Lita later shocked the world stating she was pregnant, with Matt Hardy, her then-boyfriend both on- and off-screen, thinking that he was the kid’s father. On the June 21 episode of Monday Night Raw, Kane declared that he was the dad. The next week, he revealed that he had impregnated Lita to carry-forward his legacy. Kane and Matt faced each other in a “Till Death Do Us Part” match at SummerSlam, with Lita bound to wed the victor. Kane defeated Hardy and “married” Lita on Raw’s August 23 episode.

When Kane made his memorable debut at Badd Blood 1997 – exposing himself to his half-brother, The Deadman – the WWE Universe immediately wondered what Kane looked like under his red mask. The storyline was that Kane had nearly died in a fire long ago, so it was believed that his bodysuit and mask covered Kane’s scarred and burned flesh.

On June 23, 2003, in Raw’s episode, Kane fought Triple H inside the legendary Madison Square Garden with his mask on the line. The Big Red Monster eventually lost the match and finally unveiled his face.

The unmasking rendered Kane emotionally volatile, and in an interview with Jim Ross, Kane choked Ross and set him on fire. Good Job, Mayor. He later choked Linda McMahon on the Raw stage and Tomstoned her. This action sparked bloody between Linda’s son Shane McMahon and Kane, with Kane crushing Shane in a Last Man Standing match.

Who was Kane? How did it look?

We found out at the first Hell in a Cell Match between The Undertaker and Shawn Michaels. The match was drawing to it’s conclusion when the light went out. As soon as the light went out, the organ played, and it all came rushing back to us.

The crowd was loud as Kane ripped the Hell in a Cell door off its hinges.

There he stood, taller than the death itself, one of the most fantastic crowd reactions ever came. With the raising and dropping of Kane’s arms- fire exploded from the ring posts- a sight no one can forget even to this day.