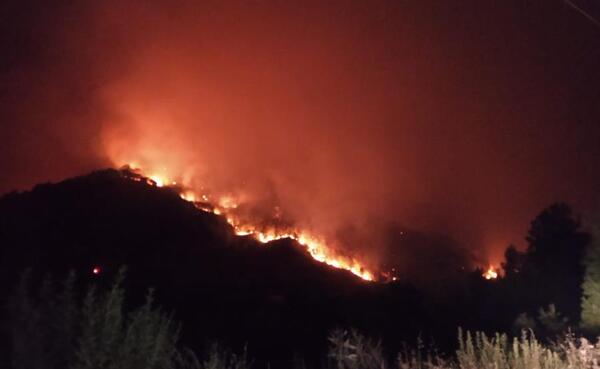 Walking wearily on the gray ashes of his burnt trees, 50-year-old olive grower, Adnan Ibrahim, sighed sadly as he trailed his hands over his burnt olives, which went up in flames when wildfires devoured large swathes of territories last week.

Clutching a handful of burnt olives in his hands, Ibrahim squeezed them in sorrow before throwing them on the ground, lamenting that some olive trees are more than 100-year-old.

A week has passed, but the smell of fire is still fresh in the air. The trunks of trees were in silver-grey color after the fire. Some of the trees’ roots were seen bare on the ground as if they were eviscerated from the bottom of the earth.

The once eye-pleasing olive groves have turned into an eyesore graveyard of dead olive trees that leaves soot on the hands when touched.

The wildfires that have erupted last week in Tartous and Latakia provinces in northwestern Syria were so huge, leaving landscapes of grayed areas in the once picturesque green villages and mountains that were also tourist attractions for Syrians.

For Ibrahim and his brothers, who live in the village of Nahel in Tartous countryside, this time of the year should have been the best as harvesting olives is around the corner.

Usually, olive growers start harvesting the olive in their lands in October after a heavy rain to extract the famous olive oil that is sold across the country.

This year, Ibrahim is not counting his harvest, but the numbers of his dead trees. Waiting for the rain this time is not to benefit the olives but to clean the lands from the fire’s ash.

Ibrahim told Xinhua that the most affected crop is the olive, saying his family and the people of the village rely on the olive oil to make a living.

They also have apple and grape crops.

“We live off of this land. It’s our lung and the air that we breath and on top of that it was the source of our livelihood,” he said.

For Ibrahim, remembering the fire is something he tries to avoid because it was a very tough time he endured. He said he doesn’t wish what happened to him to even happen to an enemy.

“We lived a very difficult time and we had to whisk our kids outside the homes while we, as men, remained in our homes to protect them from fire,” he said.

Still, Ibrahim said he cannot give up or lose hope, otherwise he would lose his life.

“I can never lose hope because when you lose hope, you lose your life. As long as I am alive my hope is big and I will plant this land again and if fire caught it again, we will put it out and will remain here,” he said, firmly.

On the bright side, Ibrahim said government officials had promised the farmers compensation to fix their lands. Ibrahim’s land needs seven more years to be able to produce again.

But after his loss, he is not afraid of the fire anymore because he said there is nothing left to burn.