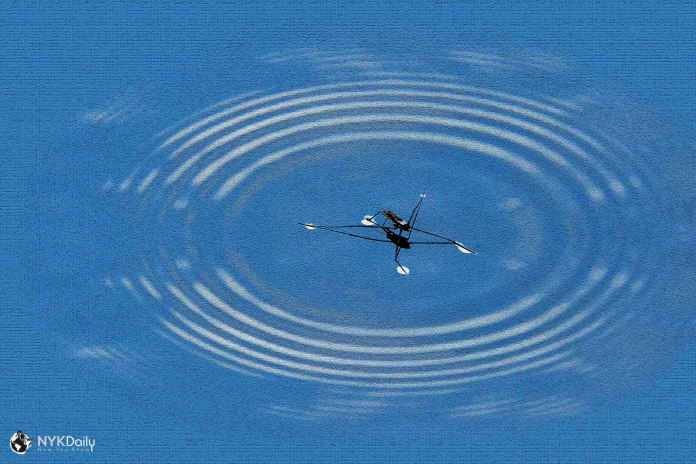 Yes, some insects can indeed walk on water. The most popular is the water strider, and how it managed to do so was a mystery for numerous years. Scientists now know that the insect uses its long legs to help distribute its tiny bodyweight evenly. The weight is spread over a large area so that the fragile skin formed on the water’s surface holds the bug on the water. The water strider legs are also water repellent, and this helps too. Moreover, the insect moves at just the right speed to prevent it from sinking. No, it is not witchcraft but pure science.

Let’s elaborate on these two reasons why some insects can walk on water:

The structure of the insect’s feet and their weight, combined with water’s surface tension, allow some insects to stroll on water. Water molecules are more bonded to each other than they are to other elements, so they create a force to stay together called surface tension. If the force that the insect foot creates on the water is less than the water’s surface tension, the bug will glide. If the strength of the foot is more prominent than the surface tension, the bug will sink. What defines the amount of force the foot generates is dependent on foot shape and weight. If the foot is flat and wide, the weight is scattered across a greater surface area, and the force is less than if the foot were thin and sharp.

Small creatures can run over water because of the surface tension water carries. You can see how water tension works if you put a drop of water on a table. The water molecules in that drop will stick together to create a dome shape, rather than lying flat and even on the table.

Water molecules stick together, and a force must be used on the surface of the water. While this force seems small to us, microscopic animals that don’t weight that much will not create enough pressure to separate the molecules. Little spiders, insects, and even a lizard species, the basilisk lizard can take advantage of water’s surface tension and can move over the water without sinking into it.

Most insects use four legs for walking. Out of the four, the first pair is modified (thanks to evolution) for grasping. It is a fan-shaped arrangement of tiny hair that captures air and repels water molecules. It is similar to the snowshoes, spreading the insect weight enough to penetrate the water and sink. In other words, they skate on the surface tension.

The insects that can walk on water include Water striders, and Mesovelia.