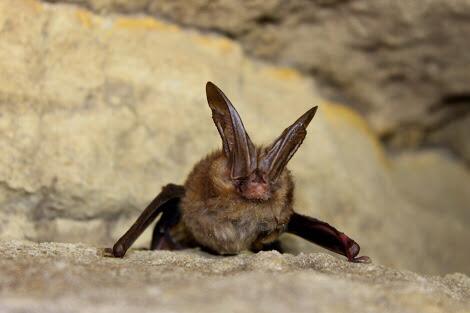 The Virginia big-eared bat is one of two endangered subspecies of Townsend’s big-eared bat. It is located in West Virginia, Virginia, Kentucky, and North Carolina. In 1979, the US Fish and Wildlife Service classified this as an endangered species. There are just 14,000 of these night wonders left in the known ecosystem.

Many exciting facts about the Virginia Big-Eared bat species add more reason to keep these beloved critters preserved and protected.

This particular species is distinguishable by its large ears, which can reach 2.5 centimeters or more. When resting, their ears go back to half of the length of their body! In addition to their most distinct trait, these mammals have soft, brown, long fur that ranges in the shade depending on their age. Weighing an average of 0.25 to 0.42 ounces 7 to 12 grams), it is one of the biggest Microchiroptera species in its range. With elongated nostrils and rounded muzzle, the Virginia Big-Eared bat can grow to 3.85 inches (98 millimeters) long by adulthood.

The VBE bat mates typically in the winter and fall. Females store the male’s sperm until they start ovulation, which generally occurs in early spring or late winter. Females have a pregnancy period of 90 days, and give birth to only one baby, called a “pup.” The pup stays with the mother for up to 2 months, in which time they are fully developed and capable of flight. These bats usually roost in caves, where they also sleep for the winter. Because they fancy it, they are mostly found in rocky limestone caves surrounded by forest with hickory and oak trees.

Although they are called the VBE (Virginia Big-Eared) bat, they are not just native to Virginia. They are also found in states like North Carolina and Kentucky. The VBE (Virginia Big-Eared) bat species is not a wandering one; they stay in their caves all year, whether sleeping (hibernating) or not. They only leave to kill for food at night, which they do with their amazing sonar abilities called echolocation. Bats see quite well, as opposed to common belief, and only use their echolocating skills to better dive and dart for insects. They are nocturnal, so it also increases their night-time navigational skills.

The threat of White-nose syndrome

White-nose syndrome is one of the most severe wildlife diseases in modern history that is presently decimating North American cave-hibernating bat inhabitants. This disease is liable for mass mortalities in hibernating North American bats caused by a cold-adapted fungus Pseudogymnoascus destructans. The rot begins to grow on bats during winter hibernation when bats are immune-compromised. The body temperature of a sleeping bat is the optimal fungal growth conditions. The fungus has hit 90% of species that sleep in caves for the winter. Pseudogymnoascus destructans spores have been observed growing on the Virginia big-eared bat. To date, no WNS death in this species has been seen, although the syndrome has killed thousands of its fellow cave-dwelling species. It is currently believed that the Big Ears may have a natural immunity to WNS through an enzyme that the bat ‘combs’ over their body that hinders the growth of the WNS fungus.