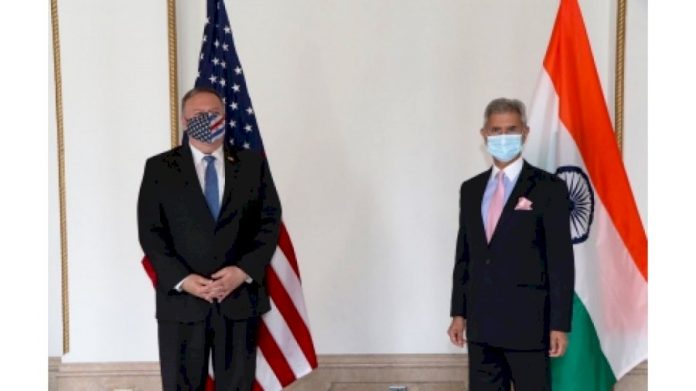 US Secretary of State Michael Pompeo arrived at New Delhi, India on Monday for the 2+2 ministerial level meet with Indian ministers. Pompeo arrived with his wife Susan Pompeo in New Delhi for the meet which will also see US Secretary of Defense Mark Esper. Both Esper and Pompeo will meet their Indian counterparts Minister of External Affairs (MEA) S Jaishankar and Defence Minister Rajnath Singh.

Both Pompeo and Esper’s two-day visit will see bilateral talks with Jaishankar and Singh and a meet with Prime Minister Narendra Modi and NSA Ajit Doval.

This will be the third edition of the 2+2 ministerial dialogue between the two nations and this time, officials have said, the focus would be regional security cooperation, defence information-sharing so that both New Delhi and Washington can tackle global challenges better.

Officials also said that there will be talks on public health cooperation to deal with coronavirus pandemic and cooperation on working together in the Indo-Pacific.

As Pompeo was set to begin his trip to India and other Asian countries, he tweeted that he would “promote a shared vision for a free and open Indo Pacific”.

“Wheels up for my trip to India, Sri Lanka, Maldives, and Indonesia. Grateful for the opportunity to connect with our partners to promote a shared vision for a free and open #IndoPacific composed of independent, strong, and prosperous nations, the secretary of state tweeted.

US Secretary of State Mike Pompeo, who arrived in the national capital on Monday for the third India-US 2+2 ministerial dialogue, followed up with External Affairs Minister S. Jaishankar on their Tokyo discussions on the Quad formulation to counter Chinese aggression.

Official sources said that it was a “warm and productive meeting” where the two sides “followed up on their Tokyo discussions and focussed on key bilateral, regional and global issues”.

The two leaders discussed their Indo-Pacific engagement and the Quad deliberations, sources said. They discussed maritime security, counter-terrorism, open connectivity and “resilient supply chains” to counter the global over dependence on China.

Both sides exchanged views on the current global situation and its contemporary challenges and discussed their shared concerns and interests including stability and security in Asia, and how best that can be ensured.

Sources said Pompeo shared with Jaishankar, the Trump administration’s thinking on Afghanistan. The EAM highlighted that India’s stakes and its continuing concern that decisions should be made by Afghans themselves without use of force. He also made clear that cross-border terrorism was completely unacceptable.

The Secretary of the State and the minister also discussed multilateral consultations and cooperation in the context of India’s forthcoming UNSC membership.

Pompeo and Jaishankar reviewed progress in bilateral ties over last four years and expressed satisfaction that they have grown in virtually every domain including trade, energy, defence and education, sources said.

The practice of consultations on foreign policy issues has also expanded at both regional and multilateral level, the two sides acknowledged.

Sources said Jaishankar stressed the uniqueness of Indian technology and talent flow in his discussion with Pompeo. He also underlined that a knowledge economy with greater data sensitivity makes an even stronger case for collaboration between India and the US. An innovative partnership is central to the bilateral future, he told Pompeo adding that “policies must be accordingly supportive”.

Before this, India has signed three foundational agreements:

1) In 2016: The Logistics Exchange Memorandum of Agreement (LEMOA)

2) In 2018: The Communications Compatibility and Security Agreement (COMCASA).

3) In 2019: The Industrial Security Annex (ISA) — the extension of the General Security of Military Information Agreement (GSOMIA) which was signed in 2002.

US will give India access to its satellite network

Indian military is set to get access to the giant satellite network of the United States allowing it to target enemy positions with more precision.

India and US militaries have decided to ink a deal to share real-time geospatial intelligence, information on maps and satellite images for defence.

India will sign a contract with the US for Basic Exchange and Cooperation Agreement for Geo-Spatial Cooperation (BECA) during 2+2 ministerial dialogue on Tuesday.

The agreement pertains to exchange of Geospatial Intelligence information for use by the governments for defence and other purposes.

Under the agreement, the US would exchange technical and procedural information about standardisation of methods, specifications and formats for the collection, processing and production of Geo intelligence information with India.

It shall also include the tools and models to process GPS data and transform Latitude, Longitude and Height coordinates across various reference frames and others. It will also allow India to use global geospatial maps of the US for accuracy of stand-off weapons like cruise and ballistic missiles.

The decision was taken during the India-US talks on military issues in New Delhi on Monday.

Indian Defence Minister Rajnath Singh and his US counterpart Mark T. Esper held talks on various defence and security issues ahead of 2+2 dialogue between both the countries.

After the bilateral meeting at the South Block, Rajnath Singh said that the talks “were fruitful, aimed at further deepening defence cooperation in a wide range of areas”.

Both the countries are also expected to sign the Marine Information Sharing Technical Arrangement.

India’s Defence Ministry also issued a statement about the meeting.

Talking about the deal, the ministry stated, “The two ministers expressed satisfaction that agreement of BECA will be signed during the visit.”

The ministry also stated that US Secretary of Defence welcomed Australia’s participation in the exercise Malabar 2020.

Earlier this month, India, in a message to China on getting a wider footprint in the Indo-Pacific region, had invited Australia to take part in an annual naval drill — the Malabar Exercise — in the Indian Ocean Region along with the US and Japan in November. Australia has agreed to participate in the maritime exercise.

“They discussed potential new areas of cooperation, both at Service to Service level and at the joint level,” said the ministry adding that the ministers also discussed requirements of “expanding deployments of liaison officers”.

Singh also elaborated upon the initiatives under the Atmanirbhar Bharat (Self Reliant) to encourage investments in the defence industry in India and invited US companies to avail of the liberalised policies in India.