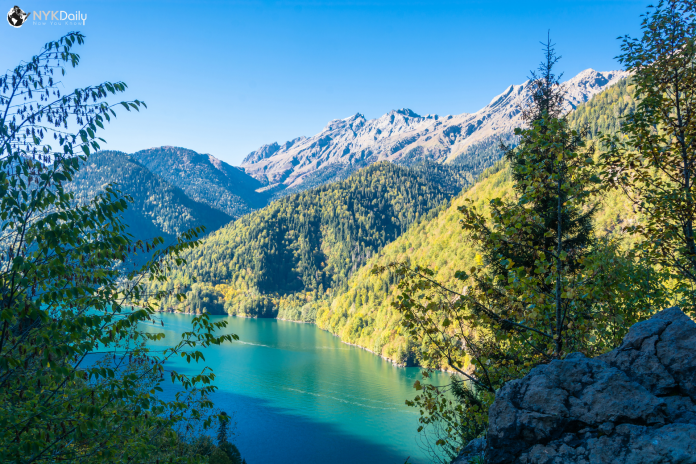 The greatest disaster to envelop Georgia since its freedom has been the misery and bloodshed that Abkhazia’s breakaway has brought about. Once the gem of the ‘Soviet Riviera,’ today, this de facto sovereign government moves on from the 1992–93 war destruction. It has been easy for foreigners to visit Abkhazia from Georgia for over a decade. However, your plans to do so should be approached with sensitivity when talking to Georgians.

Abkhazia today is a relaxed place, with several attractive towns centered on the region’s gorgeous Black Sea coast. The most beautiful is the capital, Sukhumi, but both Gagra and Novy Afon are charming too, each with their luscious mountain backdrop and excellent beaches.

How to reach Abkhazia?

There is a year-round daily train from Kursky Rail Station in Moscow to Sukhumi. It takes nearly 45 hours from Moscow and passes through Adler at about 08:00, and arrives in Sukhumi after a couple of hours more. While Sukhumi has a decent airport (Sukhum Babushara Airport (SUI IATA)), unsolved politics restricts its use for flights.

The former Council of Ministers was destroyed during the fighting when the Abkhaz took the city in September of 1993. Its fire-scorched shell has been an exposed wound at the core of the town since then, something that a large canopy installed in 2018 to mark 25 years of Victory does an excellent job of hiding. To see the building, approach it from behind, where it’s also easy to get in and walk around.

This deserted building was once a Palace of Culture in the Soviet era and had some rather remarkable interiors that anyone can wander in and explore. Check out the two awesome theatres complete with balconies and gorgeous ceiling moldings.

Novy Afon Monastery, established by Russian monks in the 1870s, stands out on the hill, about a 20-minute walk up from the main road. Its cathedral, usually thronged with worshippers, has unusually colorful murals in differing states of decay. Modesty cloaks are accessible at the entrance for anyone with bare shoulders or knees.

This enormously popular and in-depth series of karst caves are crossed on a small train line that takes travelers on a 1.4km, around an hour-long underground journey through a series of extraordinary chambers.

Things to do in Abkhazia

What to eat and drink in Abkhazia?

Russian cuisine is dominant in Abkhazia, and the Mediterranean influenced Caucasian cuisine. It has Mediterranean features due to the wealth of subtropical vegetables, fruits and seafood. Kebabs are served almost everywhere. It would be best if you tried local Abkhazian dishes, including Abista (corn porridge with cheese), Akud (bean sauce), and various meat and fresh greens. Most dishes are spicy.

Abkhazia is also a wine town. Local wines are a must-try; Ashta, Apsny, Dioskuria, Buque, Psou, Gumsta, Lykhni, and Radeda. Native spirits distilled from fruit mash and a bottle of dry wine are very distinct and cause wild excitement among tourists.