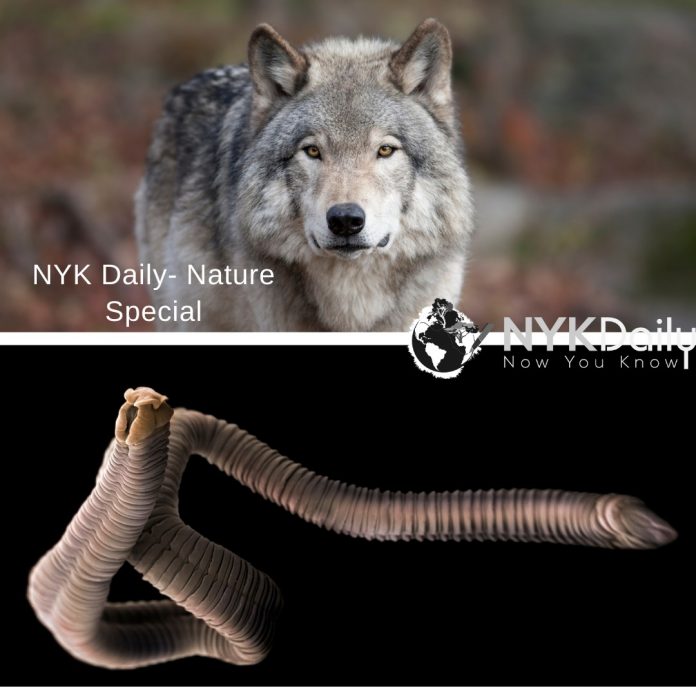 Also referred to as the gray wolf (Canis lupus) or simply wolf, is a big canine native to North America and Eurasia. Zoologists say that over 30 subspecies of the grey wolf has been found. They can weigh up to 50kg or more and are known for hunting in packs, which helps them mow down much bigger prey. The grey wolf is also known for being very territorial and quite aggressive. However, as majestic as this giant animal is, there is a dark side to it – infection with tapeworm.

A group of organisms known as endoparasites is known for infecting wolves, and these include tapeworms, flukes, thorny-headed worms, and roundworms. This piece’s focus is going to be the tapeworm (Echinococcus granulosus) and the nature of the relationship that it has with the grey wolf and the effects of such a relationship.

To be clear, the nature of the relationship between a grey wolf and tapeworm is nothing but parasitism. In modern biology, parasitism is a kind of relationship in which one party takes everything without giving anything in return. In this case, it is the tapeworm that is taking from the wolf and giving nothing useful in return. Hence, the tapeworm is a parasite in the system of wolves.

In January 2010, a scientist at Washington State University got the shock of his life when he discovered a staggering number of tapeworm infections in the Rocky Mountains’ grey wolves. The study revealed a genuinely stunning number, and some wolves had up tens of thousands of tapeworms, which was a massive infection by any standard.

The researcher, William Foreyt, is a parasitologist who documented Montana’s infections and Idaho gray wolves by tapeworm (Echinococcus granulosus), and his study was a real eye-opener. Over 60% of the sixty Montana wolves and the 63 Idaho wolves tested were all massively infected by these worms. It was not a surprise to find the worms, it was the staggering number of the tapeworms and the percentage of the infections that took him by surprise.

Previous studies already documented the presence of tapeworms in wolves from Alaska to Canada. The worms were even found to also infect other animals like moose, caribou, deer, and elk. However, no one knew that the rate of the infection in wolves was that high.

It is common to see tapeworms in grey wolves because the primary hosts of these parasites are the ungulates, fish, and small mammals that form the wolves’ main diet. Overall, tapeworms do little damage to the wolves, but that is dependent on several factors. If the quantity of the tapeworms is small and the wolf has a powerful immune system, then there can be minimal effect in the animal, and it will continue to live with it.

However, if the tapeworms are in large quantities, it can overwhelm the wolf’s system and in no time, there will be the manifestation of symptoms. These include irritation of the lining of the intestine, allergic and toxic reactions, constipation, and malnutrition. It has been observed that infections by tapeworm in wolves rise with an increase in wolves. As the wolves shed the eggs of these worms in their faeces, the ungulates get infected too when they graze.

The incredibly high infection rate of the wolves by tapeworms has spiked the possibility of tapeworm infection spread among human beings and livestock animals like cattle and goats. The worms get shelter and nutrients from the wolves while they get nothing in return as the host.

Human beings can also get infected by interacting with infected wolves. To ensure that there is no contamination, wolf hunters are advised to wear gloves when dressing the animal and should be washed after eating or wolves’ smoking.