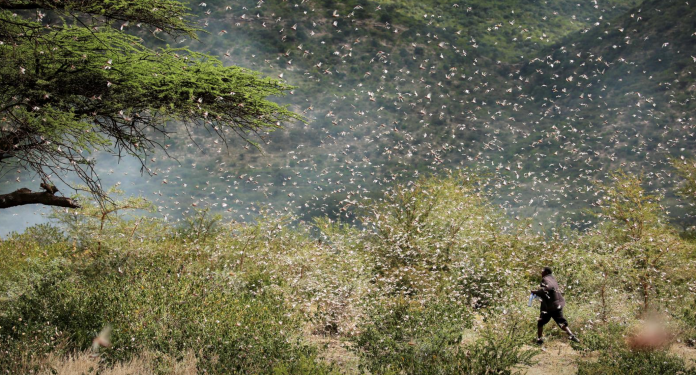 Widow-of-ten Marima Wadisha screamed, threw rocks, and in her desperation, even fired bullets at the locusts that descended on her sorghum fields in northeast Ethiopia.

But the insect swarms were so relentless that her entire crop – her family’s only source of income – was destroyed.

“They never left for a week. We are left with an empty harvest; we tie our waist and cry day and night. How can (I) feed my children like this,” she said, surrounded by five of them as she held a bundle of damaged sorghum.

It has damaged an estimated 200,000 hectares of land there since January, threatening food supplies – a single square kilometer swarm can eat as much food in a day as 35,000 people – and the livelihoods of millions.

It is part of a once-in-a-lifetime succession of swarms that have plagued East Africa and the Red Sea region since late 2019, with the coronavirus pandemic exacerbating the crisis this year by disrupting the FAO’s supply chain of pesticides and other equipment to fight them off.

“The biggest challenge now in the region is here, in Ethiopia. We are working on that together with our partners like the FAO,” said the Desert Locust Control Organization’s Eastern Africa Director for Eastern Africa Stephen Njoka.

Conflict and chaos in Yemen, where some of the swarms originated, have made spraying pesticides by airplane at source impossible. That, combined with unusually heavy rains, has swelled the swarms spreading across Ethiopia.

The World Bank has said the insects could cost East Africa and Yemen $8.5 billion this year. The FAO’s Ethiopia representative Fatouma Seid fears the pattern of destruction will be repeated next year.

“Infestation will continue into 2021. We are being re-invaded, and the swarms will then go to Kenya,” she said.