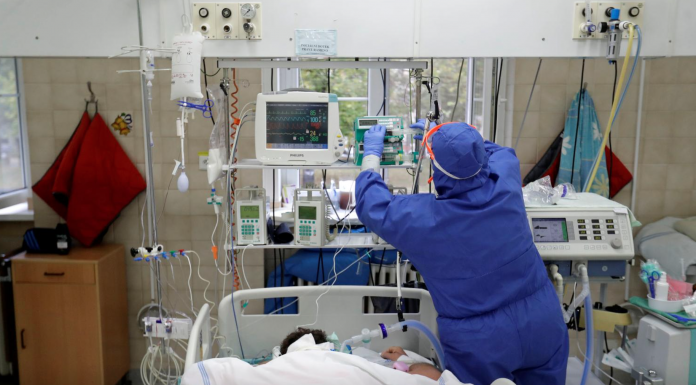 UW Health University Hospital in Madison, Wisconsin has been rushing to convert available space into units for COVID-19 patients, as the state’s medical facilities struggle to keep pace with a surge in new infections.

As part of the effort, the medical center opened a new intensive care unit (ICU) this week ahead of schedule, and it is quickly filling with coronavirus patients.

“Today we have more patients than we’ve had ever before,” said Dr. Jeff Pothof, an emergency medicine physician at UW Health. “It’s putting a strain on our capacity. Our biggest concern is ICU staffing.”

Wisconsin, a hotly contested battleground in next week’s presidential election, is one of 36 states where coronavirus hospitalizations are rising by at least 10% compared to the previous week, according to a Reuters analysis.

“We are at another critical point in the pandemic response,” Admiral Brett Giroir, an assistant U.S. health secretary, told NBC’s “Today” show. “Cases are going up in most states across the country.”

With a surge in cases overwhelming local hospitals, the Texas city of El Paso has converted a convention center into a field hospital to treat the overflow.

Unlike case counts, hospitalizations do reflect the number of coronavirus tests performed.

In Wisconsin, which broke one-day state records for cases and deaths on Tuesday, state officials asked residents to quarantine voluntarily when possible, wear masks and cancel social gatherings with more than five people.

“There’s no way to sugarcoat it: We are facing an urgent crisis and there is an imminent risk to you, your family members, your friends, your neighbors, and the people you care about,” Governor Tony Evers said.

Gina Raimondo, the governor of Rhode Island, echoed Evers’ plea at a news conference on Wednesday, urging residents of the small northeastern state to limit their interactions “to the people you need to see.”

Rhode Island is struggling to cope with a spike in cases that has overwhelmed the contact tracing system, Raimondo said as she announced the state was looking to hire 100 case navigators to boost its network.

“We’re in a bad place,” she said, raising the possibility of new restrictions to be announced on Friday. “It’s very clear where the increase is coming from. It’s coming from casual gatherings with family and friends in settings where our guards are down.”

Despite the worsening pandemic and facing criticism that he is prioritizing his re-election above the health of his supporters, President Donald Trump pushed ahead on Wednesday with mass rallies in the final stretch of his campaign.

Vice President Mike Pence was due to campaign in Wisconsin on Wednesday after members of his inner circle tested positive for the virus in recent days. Pence himself has tested negative and the Trump campaign said it was taking all necessary precautions to ensure safety at the event.

The number of new COVID-19 cases in the United States has risen 25% in the last week to nearly half a million, while the number of tests performed rose 6%, according to a Reuters analysis.

Giroir emphasized that the spike can be controlled with mitigation efforts, including wearing masks and social distancing.

“If we don’t do those things, it may force local officials and government officials in states to have more draconian measures because cases will go up if we don’t make a change,” he warned.