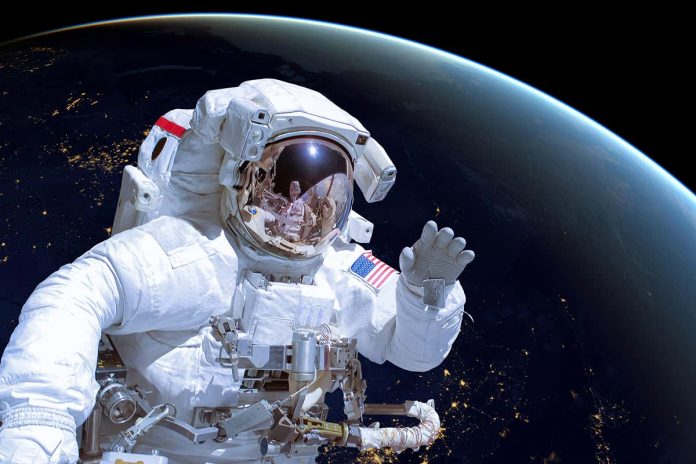 Astronauts always look excellent and well-kitted in their colorful outfits. You cannot imagine a photo of Neil Armstrong, Michael Collins or Edwin Aldrin without seeing them. These space suits are so endearing that many have chosen to become astronauts because of these catchy uniforms. Spacesuits are highly complicated and can cost as much as $150 million per piece.

Spacesuits are also called Extravehicular Mobility Units (EMUs) which explains their function as they facilitate mobility for the astronaut once outside the spacecraft like the International Space Station.

According to NASA, the flexible parts of a spacesuit alone can be made using 16 different layers of material that are sourced from different countries and businesses. That brings us to the interesting question: how are space suits made?

They are very different from your regular shirts and trousers. It is expected that the materials used for these special suits are very different. Different types of raw materials are in the manufacturing of a spacesuit. These include an impressive array of synthetic polymers. There are several layers, but the innermost one is composed of a Nylon tricot substance. There is another layer that is made from spandex, which is a stretchable and wearable polymer. Another layer is made using nylon that has been lined with urethane, and this is important for the function of pressurization in space. Dacron is another kind of polyester utilized, and it works as the layer that keeps the pressure within acceptable limits.

Synthetic materials are used like a kind of spongy rubber known as neoprene and others like Nomex, Kevlar, Gortex, and Mylar – which is lined with ductile aluminum.

Other raw materials are also utilized and these synthetic fibers have their own functions. Fiberglass is one such; it is the primary material used in making the rigid upper torso portion. Lithium hydroxide acts as a material for the filter that extracts water vapor and gases like carbon dioxide when astronauts are outside the space craft. The battery that energizes the suit itself contains a compound of zinc and silver.

Plastic tubes are embedded in the body of the suit. They are used for the transport of cold water all over the uniform. Polycarbonate substances are used for the construction of the helmet shell. There are other components utilized for the suit controls and its intricate electronic circuits.

The complicated nature of space suits means that experienced professionals in the field can only design them. There are relatively very few people in the world who have the expertise to create a spacesuit. An individual EMU space suit is so complicated that the components and items used in its design have to be sourced from more than 80 enterprises.

The parts used for a space suit can be tiny washers that measure fractions of an inch to water tanks that can be up to one foot in length. The spacesuit itself is made up of 18 different sections.

A primary life support system is crafted as an autonomous backpack linked to a supply of oxygen, electrical energy, communication sets, carbon dioxide draining systems and a fan for proper ventilation. This support system is vital as it is the survival source for the astronaut who ventures into space’s dangerous emptiness.

The support system provides temperature control, air purification, communication, and oxygen. It is so reliable that up to seven hours of oxygen can be kept in the suit’s tank allowing the astronaut to do extended tasks in space. There is also another oxygen reservoir on the suit, and it is for use during emergencies; it can last for up to 30 minutes while oxygenating the astronaut.

The helmet is a giant plastic mold but has other parts like a pressurized bubble complete with a ventilation distribution panel and a neck ring. The helmet also comes with a purge valve, which is utilized when the emergency oxygen pack is activated. There is a straw inside the helmet that the astronaut can use to drink if need be, a visor (coated with gold), which offers protection from the sun’s relentless rays, and a camera used for the capturing of all extravehicular tasks.

It is usual for spacewalks to go on for more than seven hours in a single stretch, explaining why the spacesuit is equipped with a urine collection system. This system allows the astronaut to empty the bladder while still performing tasks outside the spacecraft.

The MSOR assembly is placed outside the helmet and it is made up of a microphone and headphones, which allows for communication in both ways. This assembly comes with two pairs of lamps, which can produce additional illumination if need be. The astronaut has to adjust the visor using the hands so the eyes can be protected from the sunlight’s blistering rays. A ventilation garment and a liquid cooling unit are placed beneath the outer garment.

The production of a spacesuit is a very sophisticated and complicated process that is handled only by the most skilled. The first phase of manufacturing is the construction of the individual parts. The second phase includes the assembling of these parts. The assembly is done in sections.