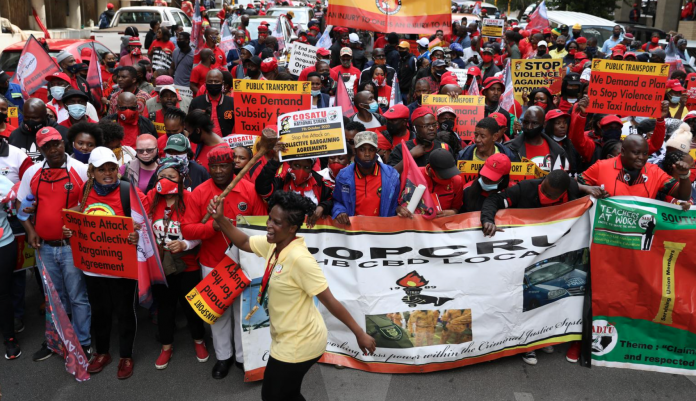 South Africa’s biggest trade union group, COSATU, led nationwide protests against job losses, wage curbs and corruption cases on Wednesday, in an outpouring of anger at how workers have been treated during the coronavirus crisis.

The union federation organised motorcades, pickets and marches in the country’s nine provinces, although it was not clear how many of its more than 1 million members heeded a call to stay away from work.

Labour unrest regularly affects companies in sectors like mining during negotiations over wages, but it is much rarer for COSATU, typically an ally of the governing African National Congress (ANC), to call a national protest to make its voice heard.

It has become increasingly critical of the government’s response to the COVID-19 pandemic, however, and this week it said the more than 2 million jobs lost in the second quarter were an indictment of the cabinet’s performance.

It also accused policymakers of presiding over “flagrant theft of taxpayer funds” after a spate of scandals.

President Cyril Ramaphosa has said his government is finalising an economic recovery plan to stimulate a rebound in employment and has promised tough action to deal with those implicated in corruption.

His spokesman declined comment when contacted by NYK Daily about the union action.

COSATU’s anger is partly rooted in a government decision not to raise civil servants’ salaries in April as promised in a three-year wage deal struck in 2018.

COSATU represents large numbers of public sector workers and disputes the government’s argument that raising salaries during the current crisis would be unjust and unaffordable.

The Department of Public Service and Administration (DPSA) said in a circular to government departments that state employees participating in the COSATU-led protests, which were supported by unions from other federations, would not be paid.

A DPSA spokeswoman said officials were still collating information on the number of state employees who did not turn up for work. COSATU’s spokesman said it was too early to say how many had downed tools.

In downtown Johannesburg and Cape Town, some shops were temporarily closed during the protest marches and traffic was disrupted, but the work of most state institutions appeared to carry on as normal.

State power utility Eskom, which has struggled to keep the lights on for years because of faults at its ailing coal-fired power stations, said it had contingency plans in place in case the protests affected its operations.