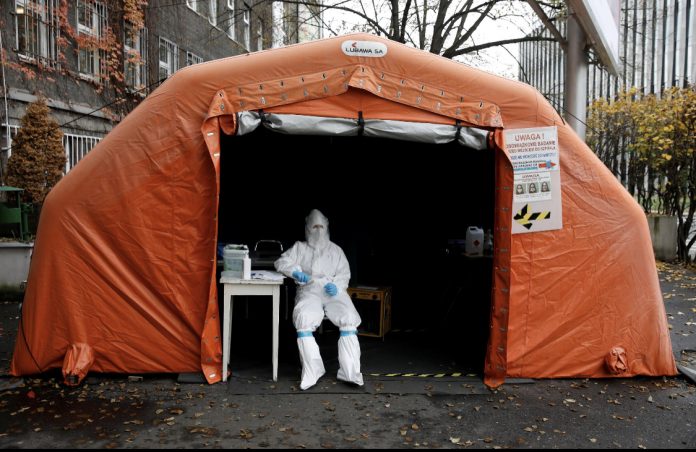 Poland will increase the number of soldiers relieving the overloaded health system to over 20,000 from around 3,000, the ministry of defense said on Friday, as the country has reported a fourth consecutive daily record for new coronavirus cases.

The soldiers will build temporary hospitals, help doctors in selecting COVID-19 patients, set up and run drive-through testing sites and help the elderly.

Earlier on Friday, the country of 38 million reported a record 21,629 new coronavirus infections, the health ministry said. As of Friday, COVID-19 patients occupied 15,444 hospital beds and were using 1,254 ventilators, compared with 14,631 and 1,203 respectively a day earlier.

In some regions, including the Mazovian region where the capital is located, only a few ventilators are left, media reports said.

“Yesterday the threshold of 20,000 new infections was passed. … we see it as a trigger to start high intensity anti-epidemic actions,” Poland’s Territorial Defence Forces said in a statement.

The country’s volunteer forces will account for around half of the 20,000 soldiers helping to fight the pandemic, their spokesman said.

The surge in infections comes at a time when Poland faces massive protests following a top court ruling last week that amounts a near total ban on abortion.

The ruling Law and Justice party (PiS) says the demonstrations will lead to further growth in cases and warned of tougher actions against protesters.

Some immunologists say, however, that most protesters have been wearing face masks, keeping distance and were out in the open, which reduces the risk of infection.

Poland’s national prosecutor instructed his local subordinates to assess cases of “illegal assemblies during the pandemic” in light of “the danger of endangering the health and lives of many people.”