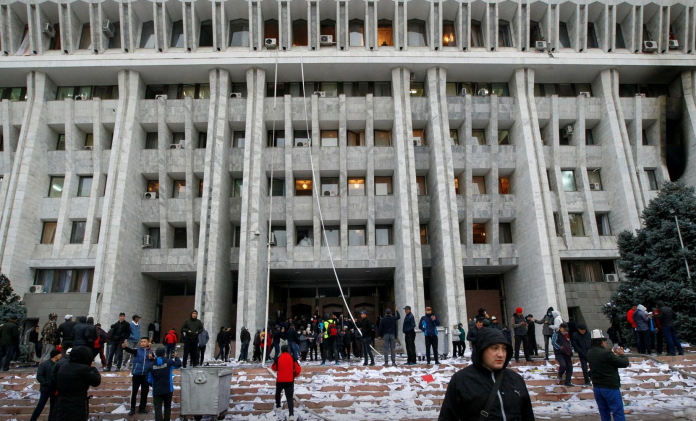 Opposition groups took control of most of the government apparatus on Tuesday after storming buildings during post-election protests, but President Sooronbai Jeenbekov clung to power as unrest risked tipping one of Russia’s close allies into chaos.

Late on Tuesday, Kyrgyzstan’s parliament agreed to nominate opposition politician Sadyr Zhaparov – freed from prison by protesters just hours earlier – for prime minister, but an angry mob then broke into the hotel where it convened, forcing Zhaparov to flee through a back door, according to Kyrgyz media.

The vigilantes scuffled with protesters who tried to force their way into government buildings or attacked businesses such as shops and restaurants, according to the 24.kg report.

On Wednesday morning, news website Akipress quoted Bishkek police as saying that the situation in the city was calm.

Protests broke out on Monday after early results showed two establishment parties, one of them close to President Jeenbekov, had swept Sunday’s parliamentary election, in a contest that was marred by allegations of vote buying.

Authorities annulled the results on Tuesday, necessitating a rerun of the vote in the nation of 6.5 million which borders China and hosts a Russian military airbase and a large Canadian-owned gold mining operation.

Making a late night appearance on television, PM nominee Zhaparov said he would propose a constitutional reform before holding presidential and parliamentary elections in two to three months.

However, Zhaparov said he did not yet have the backing of the coordination council formed by several major opposition groups, suggesting there were tensions between the allies. It was unclear when parliament could convene to approve his appointment as prime minister.