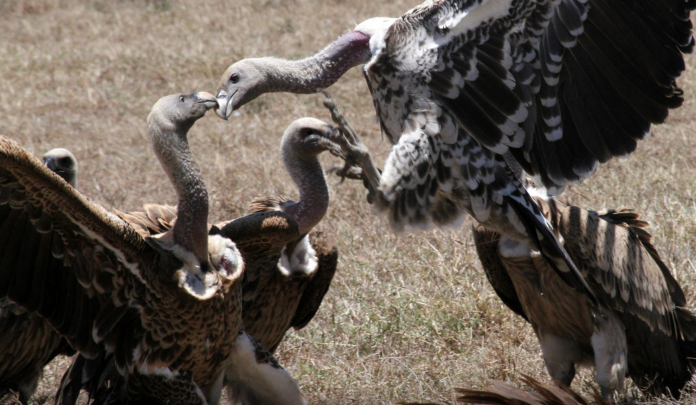 A wildlife conservation group is trying to dissuade herders in central Kenya from poisoning cattle carcasses to target predators, because vultures often end up being harmed and not lions.

Poisoning is one of the chief causes of death for Kenyan vultures. Four of the East African nation’s eight vulture species are critically endangered.

One of those, the hooded vulture, has seen its population plunge by nearly 90% over the past 45 years, said scientist Darcy Ogada of the Peregrine Fund conservation group.

Herders usually poison carcasses because they hope lions will return to the kill. Sometimes they do, but more often vultures arrive. Several dozen birds can die in a single poisoning, a huge hit for a population with slow breeding patterns.

Those populations are also threatened by the vultures’ decline, said Ogada, because vultures are nature’s cleaners.

Their highly acidic stomachs allow them to consume carcasses that might sicken other scavengers, giving them diseases they could pass onto other animals or humans.

“Vultures are the world’s apex scavengers,” she said. “Losing something that specialised is going to have lots of effects.”

The Peregrine Fund is training pastoral communities who keep livestock about the dangers of poisoning carcasses and how to build stronger bomas, a kind of shelter to keep their herds safe from lions at night.

Deforestation means traditional bomas are often built too flimsily with thin tree branches, Ogada said, so the fund shows communities how to dig deeper posts and use chain link fencing.