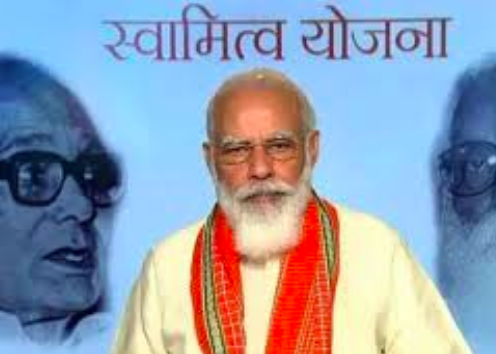 Prime Minister Narendra Modi on Sunday said that the central SVAMITVA scheme would make those living in rural India ‘Atmanirbhar’, or self-reliant.

“We will make sure that property cards reach every village in the country,” said Modi while addressing the nation during the launch of physical distribution of property cards under the ‘Survey of Villages and Mapping with Improvised Technology in Village Areas’ (SVAMITVA) scheme.

He said that property records lead to confidence among owners and opens up new avenues for investment.

The Prime Minister also said that the SVAMITVA Scheme will strengthen gram panchayats, and lead to easy management of land in villages.

Modi said that the scheme will bring about a historical change. “Today you (beneficiaries) have a right, a legal document that your house is yours; you own it.”

“With records of your property, getting a loan from the bank will be easier,” the PM said.

The SVAMITVA scheme, launched by the PM in April, enables rural masses to use property as a financial asset, aiming to create a geospatial database of all rural properties.

The Panchayati Raj Ministry’s scheme aims at a pan-India cadastral survey facilitated by drones, followed by the issuance of property cards to those living in abadi areas (inhabited rural land).

In the long run, it is hoped that the land records would help people to leverage property as an asset to avail loans and also aid in the overall rural planning processes.