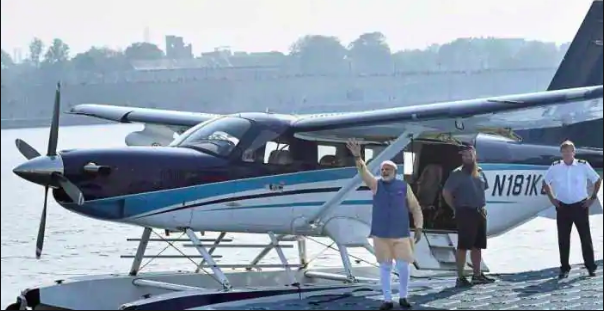 Prime Minister Narendra Modi, during his two-day visit to his home state Gujarat, on Saturday will pay tributes to Sardar Vallabhbhai Patel on his 145th birth anniversary, by inaugurating the country’s first seaplane service between the Statue of Unity (SoU) site at Kevadiya Colony to the Sabarmati Riverfront in Ahmedabad.

He will also participate in the Rashtriya Ekta Divas Parade.

The inauguration programme will most likely be the last item on the PM’s agenda on Saturday. He will take off from the Kevadiya Jetty built on lake number 3 near the Sardar Sarovar Dam. The sea plane will arrive at the Sabarmati Riverfront in Ahmedabad. From there, the PM is likely to return to Delhi.

The seaplane services will be started by the aviation company, SpiceJet.

The services will be provided incentives and benefits under the central government’s ‘Udaan’ scheme. The scheme is being implemented as per a tripartite agreement between the Gujarat government, the Ministry of Civil Aviation and the Airports Authority of India (AAI).

For the maiden flight, the company has procured a Twin Otter 300 seaplane, which has arrived at Kevadiya SoU jetty. Infrastructural facilities such as a floating jetty are ready at both the places of landing and takeoff at lake number 3 at Kevadiya and at the Sabarmati Riverfront in Ahmedabad.

Before that the PM will take part in the National Unity Parade. The police forces of Gujarat Police, Central Reserved Armed Forces, the Border Security Force, the Indo Tibetan Border Police, the Central Industrial Security Force and the National Security Guards will participate in the parade.

The PM will also witness a rifle drill by female officers of the CRPF. The Indian Air Force will be performing a flypast.

He is also likely to interact with more than 400 trainee officers from services such as the Indian Administrative Services through a virtual conference.

Prime Minister Narendra Modi arrived in Ahmedabad on Friday for a two-day visit to Gujarat, during which he will inaugurate and lay the foundation stones of a number of projects at the Statue of Unity site at Kevadiya Colony later in the day.

Soon after he landed at the Ahmedabad airport on Friday morning, Modi went to former Chief Minister and late BJP stalwart Keshubhai Patel’s residence to pay his respect and offered his condolences to the grieving family.

He also paid a visit to the families of former BJP parliamentarian- legislator duo brothers, Mahesh and Naresh Kanodia, who passed away during the week and offered condolences.

The developmental works will be taken up under the Kevadiya Integrated Development Projects to commemorate the 145th birth anniversary of Sardar Vallabhbhai Patel on October 31.

On Friday, 17 projects are slated to be inaugurated at the statue site and foundation stones laid for four other projects at Kevadiya.

These projects include Jungle Safari – a state-of-the-art zoological park built on 375 acres situated at levels of 29 to 180 metres above average sea level.

The Prime Minister will also inaugurate a children’s nutrition park that features a joyride train for children and adults to help increase nutritional awareness through edutainment.

The other projects slated to be inaugurated are the Cactus Garden – an architectural greenhouse displaying cacti and other succulent plants from 17 countries, apart from an ‘Aarogaya Van’, a garden spread over 17 acres and has 5 lakh plant of 380 species of medicinal herbs. There is also a wellness centre called Santhigiri based on Ayurveda, Siddha, Yoga, and Panchkarma treatments.

After offering condolences to Patel’s grieving family, he visited the late Kanodia brothers’ residences in Gandhinagar to offer condolences to their families. Both the brothers, leaders of the BJP, had died within a space of two days.

Modi arrived at Ahmedabad airport on Friday morning and from there, he went straight to Keshubhai Patel’s residence in Gandhinagar.

Patel, who died at the age of 92, was Modi’s predecessor before the latter became the Gujarat Chief Minister in 2001.

Modi then went to the residences of the Kanodia brothers — Mahesh and Naresh.

Mahesh Kanodia was a Bharatiya Janata Party (BJP) parliamentarian who represented Patan for four consecutive terms, while Naresh Kanodia, the younger brother, was a BJP legislator from Karjan constituency from 2002 to 2007.