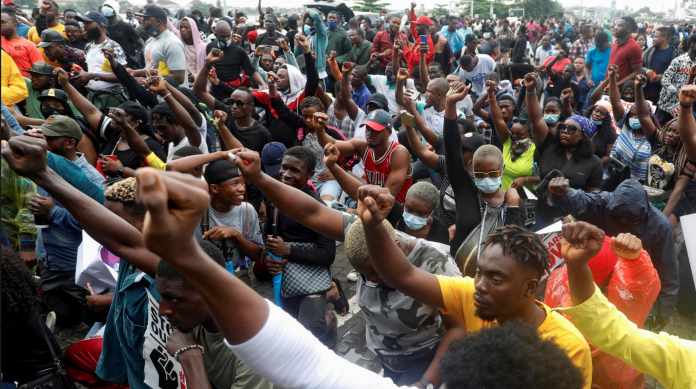 The Nigerian army will begin a two-month national exercise, it said on Saturday, while denying the move was part of any security response to recent widespread demonstrations against alleged police brutality.

Operation Crocodile Smile would run across the country from Oct. 20 to Dec. 31, the first time the annual exercise, typically concentrated in the Delta region, will be nationwide, Musa said.

The move comes just days after the army said it was ready to step in and restore order, but Musa said in a statement that the exercise “has no relationship with any lawful protest under any guise whatsoever”.

Nigerians demanding an end to the Special Anti-Robbery Squad (SARS) police unit and pressing for reforms and accountability have been rallying across the country.

The army had on Wednesday issued a statement warning what it termed “subversive elements and trouble makers” that it was “ready to fully support the civil authority in whatever capacity to maintain law and order and deal with any situation decisively”.

Protesters have been using Twitter and the #EndSars hashtag to spread photos and videos showing alleged police brutality. Social media is also a hub for organising demonstrations and Nigerians are using it to collect money and food to feed protesters and support those who are arrested.

“The army hereby enjoins all law abiding Nigerians to go about their lawful activities unhindered as the exercise has nothing to do with ENDSARS protest, but a yearly event set out by the (army) in its efforts to ensuring safety and security of Nigeria and her citizens,” Musa said in a statement.

Government officials have not responded to requests for comment on whether any websites were hacked, and we could not independently confirm the claims. However Musa said the exercise would for the first time include cyber warfare training.

“The exercise is deliberately intended to be all- encompassing to include cyber warfare exercises designed to identify, track and counter negative propaganda in the social media and across the cyberspace,” Musa said in the release.