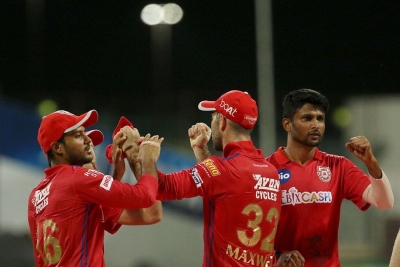 Mumbai Indians won the toss and decided to bat first at the Dubai International Stadium, where the Indian Premier League 2020 is being held.

Mumbai Indians’ (MI) Trent Boult gave just eight runs in the last over to force their match against Kings XI Punjab (KXIP) to a Super Over on Sunday at the Dubai International Stadium. KXIP ended their innings on 176/6, which was exactly the score that MI managed.

With the equation down to two runs needed off the last ball, Chris Jordan dug out a yorker to long on.

It looked like both batsmen would be able to get the two runs easily but Jordan went back for the second run only after turning a big circle at the non-striker’s end.

It left him almost an entire pitch away from the wickets by the time he reached the other end and he was inches outside the crease.

Earlier, KXIP captain KL Rahul anchored the innings as he scored 77 off 51 balls. He was dismissed in the 18th over by Jasprit Bumrah after which Deepak Hooda took the responsibility and took KXIP close to the finish line.

Punjab emerged victorious at the end of the Super Over.

The first match of the day between SunRisers Hyderabad (SRH) and Kolkata Knight Riders (KKR) had also gone into a Super Over. SRH managed just two runs batting first and KKR chased it down with two balls to spare.

He ended the match with his tally for the season on an incredible 525 runs in just nine matches at an average of 75. All three of Rahul’s 500-plus seasons have come playing for KXIP, whom he is captaining this season.

He has scored five half centuries and one century this season with his unbeaten 132 against Royal Challengers Bangalore in the sixth match of the season being the highest by any Indian in the IPL.

KXIP still have five games left in the league stage this season.