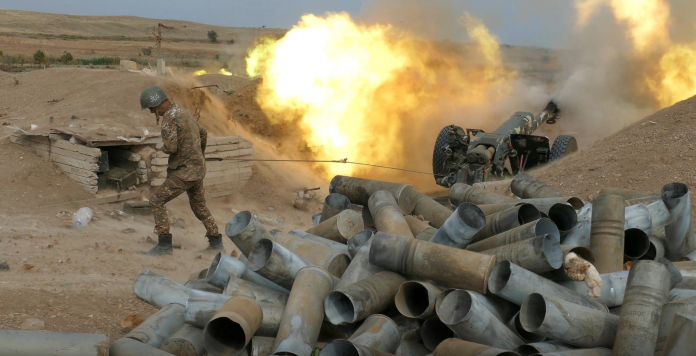 Iran’s president warned on Wednesday that fighting between Azeri and ethnic Armenian forces in the South Caucasus could trigger a regional war as the death toll rose on the 11th day of hostilities.

More than 300 have now died in the renewed fighting in and around the mountain enclave of Nagorno-Karabakh, which under international law belongs to Azerbaijan but is populated and governed by ethnic Armenians.

Azerbaijan says Azeri cities outside the conflict zone have also been attacked in the deadliest fighting in more than 25 years, taking the fighting closer to territory from which pipelines carry Azeri gas and oil to Europe.

Iran, which borders both Armenia and Azerbaijan, has been talking to both the former Soviet republics as concern mounts that Turkey, a close ally of Azerbaijan, and Russia, which has a defence pact with Armenia, could be sucked into the conflict.

“We must be attentive that the war between Armenia and Azerbaijan does not become a regional war,” Iranian President Hassan Rouhani said in televised remarks.

“Peace is the basis of our work and we hope to restore stability to the region in a peaceful way.”

He said Iran would not allow “states to send terrorists to our borders under various pretexts”.

In a new call for a ceasefire, Russian President Vladimir Putin said in a television interview that the events were a tragedy and Moscow was deeply concerned.

Sergei Naryshkin, the head of Russia’s SVR Foreign Intelligence Service, said on Tuesday the conflict was attracting people he described as mercenaries and terrorists from the Middle East.

Naryshkin said Nagorno-Karabakh could become a launchpad for Islamist militants to enter Russia and other states in the region.

But reiterating the allegations in comments to Sky News, Armenian Prime Minister Nikol Pashinyan said on Wednesday that the actions of Turkey and Azerbaijan during the conflict amounted to a “terroristic attack”.

“To me there is no doubt that this is a policy of continuing the Armenian genocide and a policy of reinstating the Turkish empire,” Pashinyan said.

Some 1.5 million Armenians were killed under Ottoman rule between 1915 and 1923.

Turkey accepts that many Armenians living in the empire were killed in clashes with Ottoman forces during World War One, but contests the figures and denies that the killings were systematically orchestrated and constitute a genocide.

Nagorno-Karabakh said 40 more of its servicemen had been killed in the latest clashes, taking its overall military death toll to 280 since Sept. 27. It says 19 civilians have also been killed and many wounded in fighting that has involved warplanes, drones, artillery and tanks, and has caused widespread damage.

The Azeri prosecutor’s office has said 28 Azeri civilians have been killed in the renewed fighting. Azerbaijan has not disclosed information about its military casualties.

Mediation efforts led by Russia, France and the United States have failed to prevent intermittent flare-ups of fighting in Nagorno-Karabakh, which broke away from Baku’s control in a war in 1991-94 that killed about 30,000 people.

Putin said he was in constant contact with Pashinyan, and Russia’s TASS news agency said Azeri President Ilham Aliyev had also spoken by phone with Putin.

In more diplomatic fallout from the conflict, Athens said it had recalled its ambassador to Azerbaijan after what it said were “unfounded and offensive” allegations by the Azeri government that Greece tolerated militants on its soil.