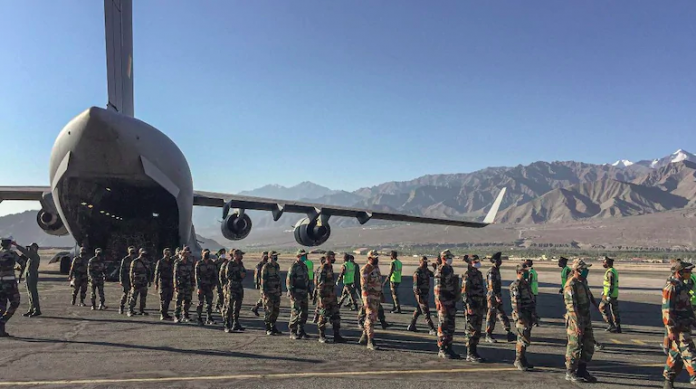 AF chief Air Chief Marshal RKS Bhadauria on Monday said Chinese air power can’t get the better of the capabilities of his force in any conflict scenario in eastern Ladakh, asserting India is “very well positioned” to meet any threat from China.

Stressing that the country’s sovereignty and interests will be fiercely protected under all circumstances, Bhadauria also said the Indian Air Force(IAF) is fully prepared to deal with any two-front war.

He said the IAF has made very strong deployments in all relevant areas in view of the five-month-long border standoff with China in eastern Ladakh, and it is in a firm position to handle any contingency along the Line of Actual Control (LAC).

The Chief of Air Staff, addressing a press conference here on the eve of the Air Force Day, said China has its areas of strength and the IAF has evolved plans and strategies to deal with all scenarios.

“Of course we are,” he said replying to a question on whether the IAF was fully ready to deal with any challenge from China.

He said swift and rapid deployments were made along the LAC in view of the ground situation, adding Ladakh was one of the areas where IAF’s assets were stationed.

“It is not only Ladakh. Ladakh is a small area. We have some airfields there where we have deployed our assets. That is a very small part of our deployment. We have deployed across all relevant operational locations that are required to access this area (Ladakh),” he added.

“Details cannot be divulged. But be rest assured that we have deployed strongly and are firmly in a position to handle any contingency.”

Bhadauria also said that there was no moment where the force came close to an air strike in the last five months of stand-off with China. He, however, said the force was fully prepared.

Bhadauria said there was no question of underestimating the adversary and mentioned China’s air-launched long-distance weapons, surface-to-air weapons systems and J-20 fifth-generation fighter fleet with advanced sensors and weapons.

“There is no question of underestimating our adversary. They have their strengths undoubtedly, The amount of investment they have made in technologies and systems is huge,” he said.

“They have areas of strength. All that we cater to in our security matrix and we are sure that we are in a position to not only take on their strong points but also see that our offensive strength is deployed accordingly.”

Asked how he sees the situation in eastern Ladakh in the next three months, Bhadauria said it will largely depend on the ongoing talks. India and China have been holding diplomatic and military talks to defuse the border standoff in eastern Ladakh.

“We hope it (talks) will progress along the expected lines. Our course of action will depend on ground reality,” he said, adding no significant stepping up of deployment of air assets by China has been witnessed in the last few weeks.

To a question, the Chief of Air Staff said the IAF is fully prepared to deal with any conflict including a two-front war.

“Our focus has been to build our operational capabilities considering the current threat scenario. We are fully prepared to deal with any situation.”

Asked if China could use Pakistan air bases, the IAF chief said it would mean a collusive threat and the force was ready to deal with such a scenario.

He also rejected suggestions that India was late in responding to the Chinese offensive in eastern Ladakh.

“We realised what China was doing in May and we acted swiftly. They do exercises in this period and it was not expected that they will utilise this period and do this at the LAC. The moment it was realised the Army responded very strongly, we responded immediately and tackled the situation,” he said.

On India’s combat readiness in the region, he said, it was not an “usual deployment”, adding the requirement of the Army and other forces in terms of rapid mobilisation of their equipment and troops was fully met by the IAF.

“Our immediate offensive deployment of combat ready units in response to the stand-off along the LAC in the North is indicative of our operational state today,” he said.

“We are determined to handle any contingency – undoubtedly our capability and intent would deter. Our airlift capability was also brought into focus as we supported the Indian Army in rapid mobilisation of troops and equipment to operational areas at a pace which our adversary didn’t expect.”

He also said the integration of Rafale fight jets has given the IAF an operational and technological edge.

“Combined with upgraded op capabilities of our current fighter fleet, it(Rafale) gives us the ability to shoot first and strike deep and hard, even in contested airspace,” he said.

The Chief of Air Staff said the matrix of threat facing India is complex as it ranges from aspirational adversaries with huge investments in military arsenal, to those collusively fronted by non-state actors, apart from sub-conventional threats emanating from terrorism and cyber space.

He said the disruptive technologies and low cost options like drones is making the threat picture even more complex, particularly in the sub-conventional domain.

“The emerging security scenario in our neighbourhood and beyond mandates a need to have a robust capability to fight across the entire spectrum of warfare. We conduct bilateral and multilateral exercises with leading Air Forces of the world and let me share with you with confidence that operationally we are amongst the best,” he added.

He also used the occasion to reaffirm the IAF”s “commitment and sacred resolve” to safeguard the country”s sovereignty and interests in “all circumstances”.

Asked about any indications of the US in helping India deal with any security challenge, the IAF Chief said the US deployments are based on their perspective and that when India plans about dealing with security challenges, it does not think about support from others.

“We will do whatever is required. We will have to fight our own wars. No one else will fight it for us.”, he said.

India sees China digging in for the winter along the disputed border in eastern Ladakh, the Indian Air Force Chief Air Chief Marshal RKS Bhadauria said. Talking about threats, Bhadauria said that the IAF is transforming at a rapid pace and over the years and has grown from being a tactical force to a strategic one with trans-oceanic reach.