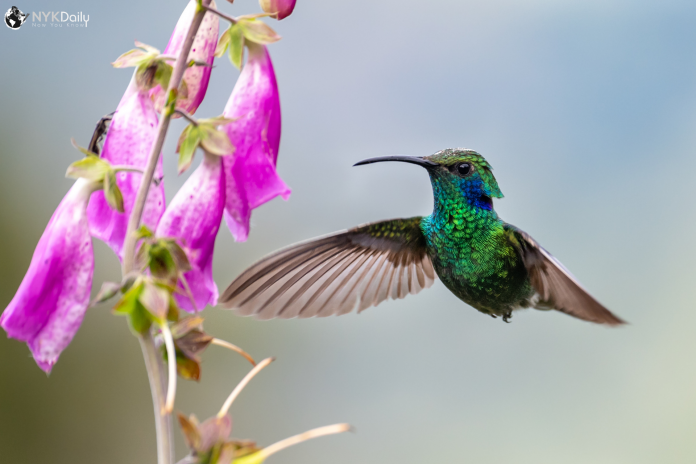 Hummingbirds are powerful and agile for their size.

If you’ve ever seen a hummingbird flit around like the golden snitch of Harry Potter, it won’t be hard to agree they have the highest metabolism of any animals.

Hummingbirds are the only flying species that can hover backward, thanks to a flight mechanism that is not just flapping but also requires a lot of wing rotation. They love showing off their aerial skills in both love and war, fighting off competitors and attracting mates. People have noticed Hummingbirds climb to 150 feet in the air and do this free-falling dive, during which they’ll spread their feathers (tail) to make a romantic noise before flying back up to the same height. Yes, hummingbirds get their name from the sound made by their wingbeats.

However, these romantic gems are as tough as diamonds.

Today, in this article, we will explore how hummingbirds survive winters despite it’s small size.

It turns out almost half the population of hummingbirds migrate. The ‘Rufous’- a native hummingbird from Alaska, makes the longest migration on earth, traveling from Alaska to Latin American Countries like Cuba and Mexico.

Other hummingbirds make their way to brighter climates in Mexico, the Caribbean, and Central America. However, some do not. And if they do not, they need a place to sleep and feed.

Hummingbirds have the greatest metabolism of any endothermic animal discovered. Endothermic means that for hummingbirds to survive the cold, it must generate its own body heat. At the same time, a high metabolism means that they need many calories to sustain themselves to live to fly. Besides feeding on nectar and tree sap for calories, hummingbirds are carnivores and feast on spiders and insects that cannot typically survive in cold temperatures. Hummingbirds keep themselves warm through an endothermic process activated by their bodies, similar to humans. Plus, they eat almost anything from flowers to dead insects to boost their metabolism during the winter cold.

Hummingbirds are charming creatures, and there is still much to learn about them.