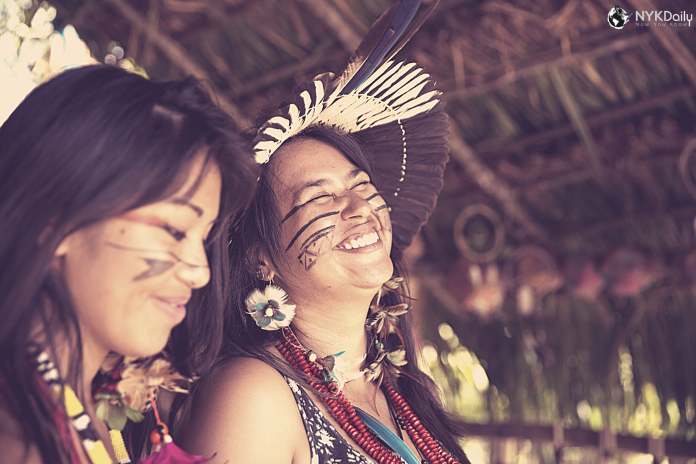 The Tupis were one of the most populated tribes indigenous to Brazil before colonization. Researchers conclude that while they first lived in the Amazon rainforest from about 3000 years ago, the Tupi started to move southward and slowly populated the Atlantic coast of Southeast Brazil.

The Tupi tribes occupied almost all of Brazil’s shore when the Portuguese first arrived. In 1500, their population was measured at 1 million people, nearly equal to Portugal’s population. They were split into tribes; each tribe had around 400 to 2,000 people. Some examples of these tribes are Tupinambá, Tupiniquim, Tabajara, Potiguara, Temiminó, Caetés, Tamoios. The Tupi were skilled agriculturalists; they grew corn, beans, cassava, sweet potatoes, tobacco, peanuts, cotton, squash, and many others. There was no unified Tupi identity even though they spoke a common language.

According to original statements by European writers, the Tupi were split into different tribes that would continuously battle with each other. In these battles, the Tupi would generally try to capture their enemies to kill them in cannibalistic rituals later. The warriors seized from other Tupi tribes were eaten, as they believed it’ll add to their strength. They chose only to sacrifice warriors deemed to be healthy and strong. For the Tupi soldiers, even when inmates, it was a distinguished honor to die valiantly during battle or to demonstrate courage during the festivities leading to the sacrifice. The Tupi has also been documented to eat the remains of dead relatives to honor them.

The tradition of cannibalism among the Tupi tribes was made famous in Europe by Hans Staden, a German mariner, soldier, and mercenary, exploring Brazil to steal riches, who was captured by the Tupi in 1552. In his report published in 1557, he tells that the Tupi carried him to their village, claiming he was to be eaten at the next festivity. There, he allegedly won a powerful chief’s attention, whom he cured of a disease, and his life was later spared.

Cannibalistic customs among Tupi and other races in Brazil declined slowly after European contact and religious conversions. When Cabeza de Vaca, a Spanish conquistador, landed in Santa Catarina in 1541, he attempted to halt cannibalistic customs in the King of Spain’s name.

Because our knowledge of Tupi cannibalism relies solely on European writers’ primary source accounts, some in educational circles have disputed the very presence of cannibalism. William Arens attempts to undermine Staden’s and other writers’ reports of cannibalism in his book The Man-Eating Myth: Anthropology & Anthropophagy, where he maintains that when concerning the Tupinambá, “rather than dealing with an example of serial documentation of cannibalism, we are most likely facing only one source of questionable testimony which has been included almost verbatim into the written reports of others claiming to be witnesses.”

Although the Tupi population largely disappeared because of European diseases to which they had no protection or because of slavery, many maternal Tupi ancestry controlled much of Brazilian territory, taking the old traditions to several country points. Darcy Ribeiro wrote that the first Brazilians’ characteristics were much more Tupi than Portuguese. Even the language they spoke was a Tupi-based, named Língua Geral or Nheengatu, a lingua franca in Brazil until the mid-18th century. The region of São Paulo was the most important in the proliferation of Mamelucos. In the 17th century, under the name of Bandeirantes, they spread throughout the Brazilian territory, from the Amazon rainforest to the South. They were accountable for the significant expansion of the Iberian culture in the interior of Brazil. They acculturated the Indian tribes who lived in isolation and took the colonizer’s language, which was not Portuguese yet, but Nheengatu itself, to the colony’s most forbidding corners.

Nheengatu is still spoken in some areas of the Amazon, although the Tupi-speaking Indians did not stay there. As in other areas of the nation, the Nheengatu language was prefaced there by Bandeirantes from São Paulo in the mid-17th century. The way of living of the Old Paulistas could almost be mixed with the Indians. Within the family, only Nheengatu was spoken. Hunting, agriculture, fishing, and fruit-gathering were also based on native-Indian traditions. What differentiated Tupi from the Old Paulistas was the usage of salt, clothes, weapons, metal tools, and other European items.

Examples of Portuguese words that came from ancient Tupi are: tatu, soco, mirim, cutucar, perereca, tiquinho, mingau. The names of many local fauna – such as jacaré (“South American alligator”), arara (“macaw”), tucano (“toucan”) – and flora – e.g. abacaxi (“pineapple”) and mandioca (“manioc”) – are also taken from the Tupi language. A number of cities and places in modern Brazil are named in Tupi (Pindamonhangaba, Itaquaquecetuba, Ipanema, Caruaru). Anthroponyms include Ubiratã, Ubirajara, Jussara, Moema, Janaína, Jurema. Tupi surnames exist, but they do not imply any ancient Tupi ancestry; rather they were adopted as a manner to exhibit Brazilian nationalism.