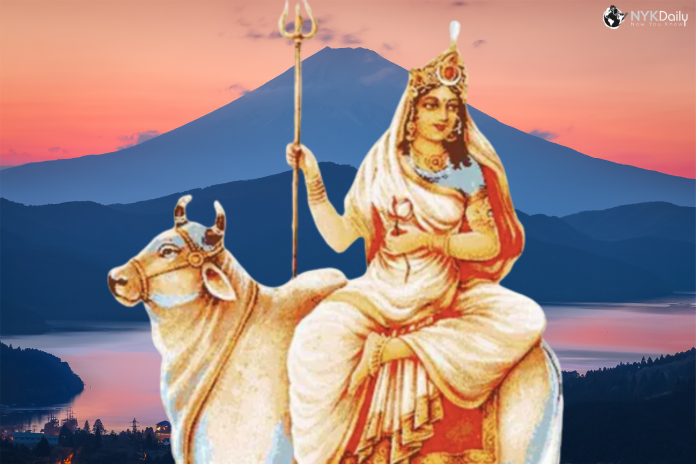 Navaratri, a Hindu Festival that lasts for 9 holy days, begins today on October 17th, 2020. All the nine days of Navratri are dedicated to nine different forms of Maa Durga, a powerful and revered Hindu Goddess.

The first day of Navratri is dedicated to Maa Shailaputri.

Shailaputri is the absolute form of Maa Nature. The name “Shailaputri” signifies the daughter (putri) of the mountain (Shaila). The manifestation of Brahma, Vishnu and Shiva’s power, she is seen with a bull, and carries a lotus and a trident in her two hands.

In her previous birth, she was the daughter of Daksha, named Sati. Once Daksha had arranged a Yagna (holy and pious fire involving worship) and chose not to invite her husband Shiva. Sati reached there alone. Daksha insulted Shiva and passed sarcastic remarks in her presence. Sati could not tolerate the insult of her husband and immolated herself in the holy fire. She was reborn as the daughter of Himavat (Himalaya) by the name of Parvati who once again married Lord Shiva and completed the unfinished story of their love.

The History behind the Name Shailaputri

As a teenager, one day, Devi Parvati was playing with her friends near the Himalayan mountains. The region around the mountain was covered with grass, adjacent to Varuna River with lotus flowers on its banks.

Maa Parvati was playing a game of hide and seek, and it was her turn to spot her friends.

During her search, she came across the river’s shore covered with lotus flowers. Mesmerized, she was about to pick one, when a cow suddenly came mooing to her as if she were scared. Devi Parvati, curious to know what happened, followed the cow and saw something horrible. She saw the skeletons of cows, with flesh that looked freshly eaten. The image in front of Devi Parvati was horrifying and she kept her hand on the cow’s head, and closed her eyes. She got to know about the demoness Tarika (Sister of demon Tarkasur). Tarkasur had sent Tarika to Earth to kill the new form of Devi Adishakti, Devi Parvati. Devi Parvati was a threat to Tarkasur as she and Lord Mahadev’s son was a threat to his life.

Tarika, being a demoness, killed and ate cows as she found it delicious.

The cow narrated the story of this demoness hunting down cows.

After understanding the situation, Devi Parvati chose to fight the demoness. For this battle, Devi Parvati took the form of Shaila (a small mountain) – a form similar to her father, Himavat who was King of the Himalayas.

The cow hid behind the mountain and started mooing as a bait. The sound enticed the evil Tarika into quickly arriving there and she saw the Shaila (mountain) with the cow behind it. Tarika tried to come close to the cow but it was challenging as the Shaila would move and block Tarika. Tarika kept failing.

It was about to get dark when Parvati’s friends and Lord Himavat arrived. They saw the fight ensuing between Shaila and evil Tarika. Some villagers also arrived at the site, searching for the cows and saw this battle. Himavat, being the king of the region, was drastically shocked by seeing a demoness in his region and wanted to destroy her. Tarika, fed up by the mountain’s obstruction was determined to break the Shaila.

Himavat raised his sword to kill Tarika and Tarika raised hers upon the Shaila. Swiftly, the Shaila burst and everyone stayed still. As the Shaila started exploding, golden rays began to emerge out of it and Devi Parvati came out in her real form – with a Trishul in hand and a crown on her head. Everyone was stunned to see the divine Goddess appear. Himavat took a step back but Tarika was infuriated. She was about to strike Devi Parvati but the Goddess lifted her Trishul and threw it on Tarika, thus killing the demoness. Meanwhile, the cow ran towards the river’s shore, picked a lotus, brought it to Devi Parvati and gifted it to her as a token of gratitude.

After this incident, Himavat named his daughter Devi Parvati as Mata Shailaputri.

P.S: Dedicated to my adorable mother Shail Chandwani who was named after the Goddess.