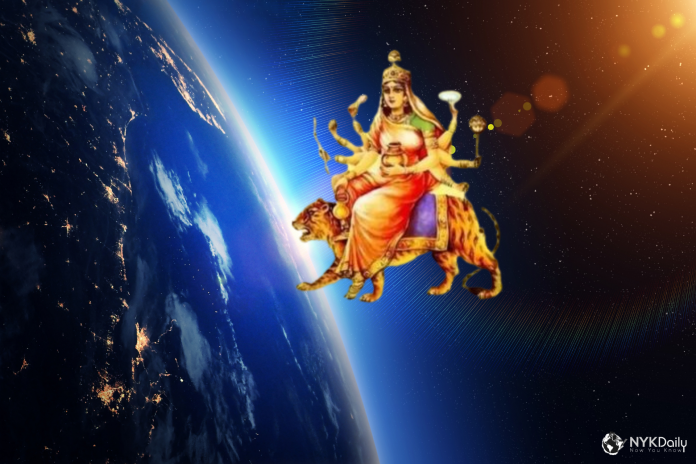 Kushmanda is worshiped on the 4th day of Navratri. She is believed to promote health and offer strength and wealth. Goddess Kushmanda has 8 hands, and because of that, she is also called as Ashtabhuja Devi. All the power to bestow Siddhi (enlightenment) and Niddhi (Treasure) is seen in her Jap Mala.

History and Significance of Maa Kushmanda

Before the start of the universe, there was darkness everywhere. Life was unthought off. Suddenly, a ray of light started spreading throughout. The light form kept spreading randomly. Gradually, the light started taking definite shape, looking like a Supreme lady, Maa Kushmanda.

The birth of the universe was possible because of the Goddess Kushmanda’s smile. She was the one who produced a cosmic egg. Her smile removed the darkness, thus creating the universe as we know it.

The planets, sun, galaxies and even our planet earth started evolving from this cosmic egg.

According to science, before the big bang, there was nothing (darkness). There was a sudden burst of light that gradually cooled down, creating the universe. This is the same theory Hinduism propagated thousands of years ago, with Maa Kushmanda and the cosmic egg.

Maa Kushmanda centered herself in between the sun, and she became the foundation of the energy and light essential for life. The sun gives life to our world, and Maa Kushmanda herself is the sun’s power and is the source of the sun’s energy when she lives within the core of the Sun God. It was to build a balance in the universe and present life to all living beings from the sun rays. Her strength gives the sun its ability to give life to everyone, as she herself is Shakti.

Maa Kushmanda is the source of Lord Surya’s power. Without her, Surya’s energy and light will grow dark, wither away and will become powerless. Lord Surya gives life to the universe, but she is also the one who is responsible for it. Her power makes him capable of doing so, and when Mahashakti appears in the form of Maa Kushmanda, it is what she does. From her smile, an intense energy emanates which presents light and creation to the universe. She always smiles when the Gods, people and other celestial creatures honor her.

When the universe was dark and non-existent, Maa Kushmanda produced the Cosmic egg, bringing light to the universe; thus, her name Ku– little, Ushma– energy, and anda means egg.