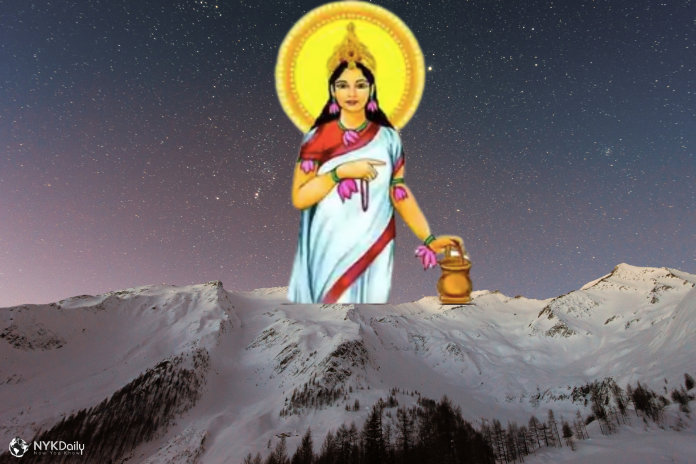 The word Brahmacharini is comprised of two Sanskrit Words Brahma (ब्रह्म), meaning “the one self-existent Spirit, the Supreme Reality, Universal Self, Personal God, the sacred knowledge” and Charini, the feminine version of one who is a charya (चर्य). She is also known as ‘Tapascharini,’ ‘Aparna,’ and ‘Uma.’

The word Brahmacharini means a female who pursues the sacred divine knowledge. Goddess Brahmacharini wears white clothes (a symbol of purity), holds a rosary (japa mala) in her right hand and Kamandal (a humble tumbler) in her left hand.

The History behind the Name Brahmacharini

Parvati Maa was an intelligent young girl, growing up near the Himalayan mountains. She had lots of admirers, but she rejected every one. When she kept on denying all her suitors, her father, King Himavat enquired, “Parvati, why are you renouncing everyone?”

Parvati responded, “I cannot marry anyone else except Shiva.” Yes, she was in love with Shiva, the God of the three worlds.

When Parvati grew up, Narada – son of Brahma, visited her. Narada knew that Parvati was a Goddess reincarnated and had come to marry Lord Shiva. Parvati was the first one to greet Sage Narada. Sage Narada blessed her and claimed, ‘You are born to be the mother of the Worlds. You must go and fulfil your fate.’

He told her that she can become Shiva’s companion if she can prove her devotion and compatibility through penance or Tapa. Devoted to being Lord Shiva’s consort till eternity, Parvati embarked upon a tough regime of devotion and penance. For thousands of years, she only ate fruits and waited patiently for Shiva. She slept on floors under the open sky in order to complete her tapa.

Later, she chose to give up food and water for numerous years, and this is why she is called Tapascharini or Brahmacharini, which means the one who follows Tapa’s path.

The news of such lengthy and laborious penance started spreading like wildfire. After over 3000 years, Lord Brahma arrived in front of Parvati and told her that no one had immersed oneself in Tapa the way she had. He also said that only she could have followed such hardships as her love for Shiva was pure and real along with her pure intent.

Following her penance, Parvati came to be known as Maa Brahmacharini (Mother of divine and sacred knowledge).