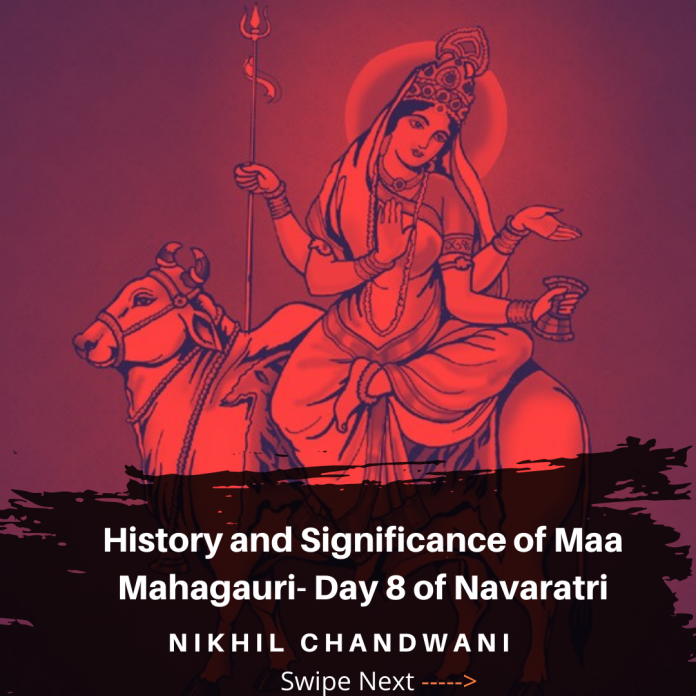 Mahagauri is the eighth avatar of Maa Durga. Mahagauri has the power to fulfill all the desires of her devotees. The one who worships Mata Mahagauri gets relief from all the miseries in life. Mahagauri has four arms. She holds a tambourine in her left upper arm, and the lower one is in a blessing mantra. Her right arm is in the pose of allaying fear, and right lower hand carries a trident in it.

History and Significance of Mata Mahagauri:

Maa Parvati wished to marry Lord Shiva, and as per Rishi Narad’s suggestion, she underwent a severe tapa deep in the forest to please God Shiva. She abandoned all amenities, even water, and braves cold, heat, storm, and rains for thousands of years.

Later, Bhagwan Brahma arrived in front of Parvati and told her that no one had immersed oneself in tapa the way she had. He also said that only she could have followed such hardships as her love for Shiva was pure and real along with her pure intent.

However, because of thousands of years of tapa, Maa Parvati was covered in insects, dry leaves, and soil.

She turned extremely thin and pale. Due to this severe Tapasya, Maa Parvati lost all her light and became remarkably weak. Finally, after a long time, God Shiva took notice of her tapa. He even tested her love and realized that she was indeed his Sati from the previous birth.

Pleased by her devotion, God Shiva immersed her in the Ganges’ water that flows from his locks. Ganga’s sacred water washed away all the dirt from Mata Parvati’s body, and she was able to regain her lost charm. She emerged in the form of Mahagauri, as white as a jasmine flower, and clothed in white. She rides a white-colored bull and has four arms.

Mother Gauri is Shakti, or Devi, who appears in many forms, such as Durga, Parvati, Kali, and others. She is auspicious, brilliant, and defends good people while punishing evil. Mother Gauri enlightens the spiritual seeker and removes the fear of rebirth by granting protection.